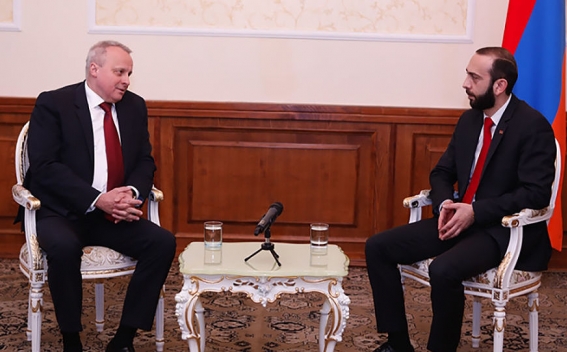 On January 27, the President of the National Assembly of the Republic of Armenia Ararat Mirzoyan received the Ambassador Extraordinary and Plenipotentiary of the Russian Federation to our country Sergey Kopirkin.

Welcoming the Ambassador, Ararat Mirzoyan once again underlined the importance of the allied relations between the two countries and highly assessed the active involvement of the Russian side in terms of both suspending the military actions in Nagorno Karabakh and overcoming the created humanitarian problems. The President of the National Assembly has stressed that the most important agenda item for the Armenian side continues remaining the return of the Armenian prisoners of war and the captives to the homeland and has expressed confidence that the Russian colleagues will continue to make mediating efforts in this direction in order to carry out the appropriate provision of the tripartite statement signed on November 9.

The Speaker of the parliament has also underscored that the tripartite statement has not solved the Nagorno Karabakh problem, and the Armenian side is ready to resume the negotiations over the Nagorno Karabakh status in the framework of the OSCE Minsk Group Co-Chairs, taking as a basis the peoples’ right to self-determination.

Ambassador Kopirkin presented the works being done by the humanitarian centre set up by the Russian Federation, as well as by the peacekeepers. In his turn the RF Ambassador has noted that it is necessary to carry on the peaceful negotiations in the framework of the OSCE Minsk Group for the specification of the complete settlement of the problem, including the Nagorno Karabakh status.

During the meeting the interlocutors also discussed a wide scope of issues regarding the more activation and deepening of cooperation on bilateral and multi-lateral platforms of the two countries’ parliaments.