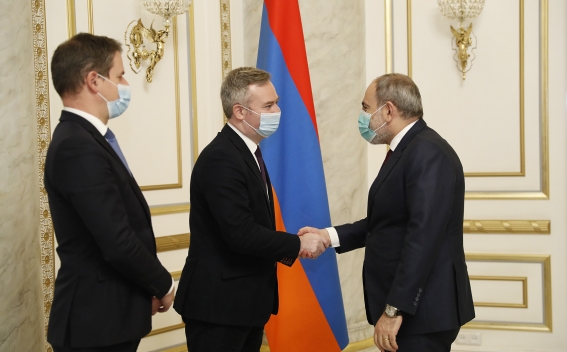 Today, Prime Minister Nikol Pashinyan received Jean-Baptiste Lemoyne, French Secretary of State for Europe and Foreign Affairs and the delegation headed by him.

The Armenian Prime Minister and the French Secretary of State had private talks, followed by an extended meeting. Greeting the French delegation, the Premier said: “Our meeting follows up on the agreement reached with President Macron. It reflects the privileged relations between France and Armenia. There has traditionally been a sincere top-level dialogue between our two countries, and I want to express our gratitude to President Macron and Foreign Minister Le Drian for showing personal concern from the very first day of the war. Of course, we went through a highly challenging war; we have bitter feelings about it; we had a lot of casualties, and we are facing a very difficult situation. This visit is extremely important in terms of using the opportunities we have to meet the emerging challenges. Our discussions and the agenda also have economic and humanitarian aspects, and I would like you to convey my deep appreciation to President Macron for such a prompt response to our conversations and agreements.”

Thankful for the warm welcome, Jean-Baptiste Lemoyne noted that his delegation comprised representatives from the French Treasury, the French Development Agency, and their visit followed up on the agreements and discussions held between the Armenian Prime Minister and the French President:.

“It was very important for our President to respond to each of your needs as quickly as possible. It was a matter of urgency in December as several charitable planeloads arrived in Armenia, which transported several tons of cargo owing to the joint efforts of different French charities and local authorities, which once again came to testify to the friendship between our two nations. After a period of urgent intervention, as you mentioned, medium and long-term economic programs are being prioritized now. In this regard, I would like to thank everyone who has been involved in intensive meetings in branch offices for a week now.”

Issues related to the development of Armenia-France relations, including in terms of attracting investments and providing financial assistance were discussed at the meeting. The agenda of economic partnership was touched upon. The parties considered promising interaction in the spheres of transport, reservoir construction, agriculture, high technologies, digital innovations, public sector digitization, as well as cooperation in the development of regional communications. In this regard, Prime Minister Pashinyan suggested considering the possibility of developing partnerships between the Armenian National Interest Fund (ANIF) and the French Development Agency, which was accepted by the French side.

Nikol Pashinyan next referred to the possibility of expanding the scope of educational cooperation, stressing that the activity of the French University in Armenia is a successful example of such interaction. Jean-Baptiste Lemoyne noted that as represented by President Macron, the French side considers promising cooperation in the field of higher education and believes that efforts should be continued in that direction.

The interlocutors exchanged views on the prospects of the academic settlement. An agreement was reached to set up an interagency communication platform for continued contacts, as well as to continue working closely on mutually advantageous projects.