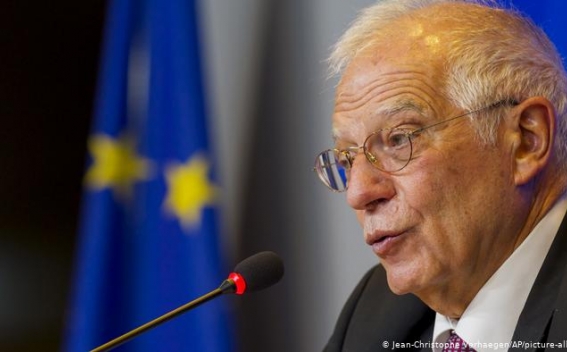 EU High Representative for Foreign Affairs and Security Policy Josep Borrell will visit Moscow on February 4-6. During his visit, he plans to discuss a range of topics with Russian Foreign Minister Sergey Lavrov, including bilateral relations, the fight against the pandemic, the Iranian nuclear deal, the conflict in Ukraine, and the arrest of Russian blogger Alexey Navalny, the European External Action Service (EEAS) said in a statement published on Friday, TASS reports.

"The visit will provide an opportunity to have wide-ranging discussions with Foreign Minister Sergei Lavrov and other Russian interlocutors ahead of the European Council’s strategic discussion on EU-Russia relations scheduled for March," the statement continues.

"High Representative Borrell will address Russia’s actions in Ukraine and in the neighbourhood, the importance of continued implementation of the Iran nuclear deal, the global response to the coronavirus pandemic, climate change, among others. The recent poisoning, detention and arrest of opposition politician Alexei Navalny, and the concerns over fundamental freedoms and human rights in Russia more broadly will also be on his agenda," the EEAS informed.

During the visit, Borrell will also have meetings with representatives of Russian civil society organizations and members of the academic community in Moscow, the statement notes.

Ahead of the meeting, Borrell said, quoted by the EEAS: "The relationship with Russia is one of the EU’s most complex. Recent developments only serve to further underline the need for me to visit Moscow. But beyond the issues of contention there are also areas in which the EU and Russia do cooperate, or need to cooperate more, that require our urgent attention."

The Russian Foreign Ministry informed earlier that Lavrov would have talks in Moscow with Borrell on February 5. The sides are expected to discuss the entire spectrum of problems and prospects of the Russia-EU relations. "It is also planned to exchange views on the current issues of the international agenda, including the situation in the Western Balkans, in the Middle East and North Africa, in the Commonwealth of Independent States (CIS). They will also discuss prospects for the implementation of the Joint Comprehensive Plan of Action to settle the situation around the Iranian nuclear program, further steps to stabilize the situation in Nagorno-Karabakh, issues of security in Europe and other topics of mutual interest," the ministry said.

In his interview with Reuters earlier, Borrell said his visit to Russia was "more necessary than ever" in the current conditions.