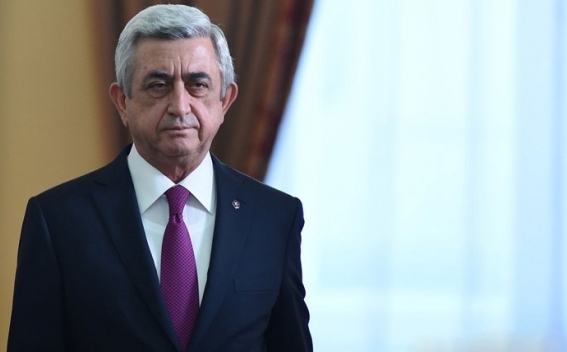 Third President of the Republic of Armenia Serzh Sargsyan sent a condolence message to the Hovnanian family over the demise of renowned American-Armenian philanthropist, public figure, businessman Hirair Hovnanian.
The message reads, in part:
"I was deeply saddened to learn of Hirair Hovnanian’s demise. He was one of the most patriotic Armenians I have ever known, who from the first years of Armenia’s independence provided invaluable support to the Homeland in all areas where it was needed, from defense and security issues to disaster zone recovery and many other issues of all-national importance.
Hirair Hovnanian was also one of our national figures who stood firmly at the core of the Armenia-Artsakh-Diaspora trinity, who played a significant role in the activities of the Hayastan All-Armenian Fund, as well as the Armenian Assembly of America. Hundreds of projects implemented in Armenia and Artsakh with the help of Hirair Hovnanian and his late wife of blessed memory Anna Hovnanian represent important chapters in their biographies.
I am convinced that the Armenian people will appreciate their devoted son’s activity at its true value. Hirair Hovnanian’s memory will always be bright in the hearts of generations.
I express deep condolences and sympathy to Hirair Hovnanian’s family, relatives, friends and colleagues.
May God brighten the honest soul of Hirair and give comfort to all those who mourn his loss.
Hirair Hovnanian’s good deeds will definitely intercede for him to serve as the best evidence of his virtuous life in heaven.
Rest in peace"
Հայերեն На русском