I Was Defeated by Much Bigger Forces in the West and in the North: Armenia's 3rd President 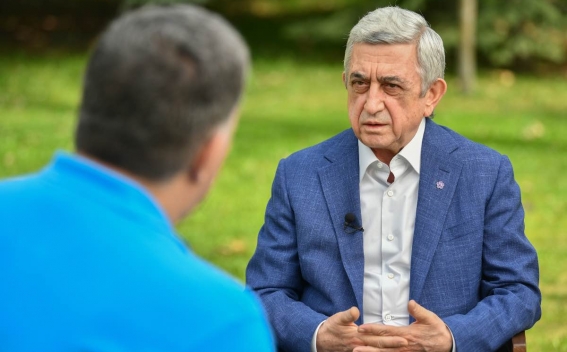 I don’t think there is anyone who doubts that what happened in Armenia in 2018 happened with great support from abroad. This is what third President of Armenia Serzh Sargsyan said in an interview with film director Mher Mkrtchyan, News.am reports.

“People often ask who supported, and I say all the forces that had notions of Armenia that were different from my government’s notions. Now Armenia’s allies and partners have three options to support or not support. One of the first options is that the leader of the given country congratulates the force that comes to power through elections. The second option is that the Ministry of Foreign Affairs of the particular country makes a statement. The third option is when the countries are under the influence of forces and individuals in the specific country. After April 17, 2018, that is, after I was elected Prime Minister, I received many congratulatory remarks from Russia, the leaders of member states of the Eurasian Economic Union and other countries. Some of the statements were somewhat precautionary. Of course, we saw some problems with the behavior of the forces guided by those countries. I can’t say what the reasons were, but perhaps it was my government’s persistence on the path to a resolution of the Nagorno-Karabakh conflict,” Sargsyan said.

Sargsyan reminded that Armenia acceded to the Eurasian Economic Union in 2013, adding that the member states of the EEU responded very moderately and considered the events normal, but he didn’t rule out the third option according to which some forces would make wrong calculations and their purpose might not have been change of power.

“Yes, I wasn’t defeated by these authorities, I was defeated by much stronger people and much stronger forces, but I made myself very clear. There were such forces in the West and in the North, but they weren’t the states’ approaches. I’m certain you are aware of the Russian-language and English-language articles in which the authors were trying to form opinions in Armenia that weren’t too objective,” he said.