International Recognition of the Artsakh Republic Has Been and Remains on the Agenda: Arayik Harutyunyan 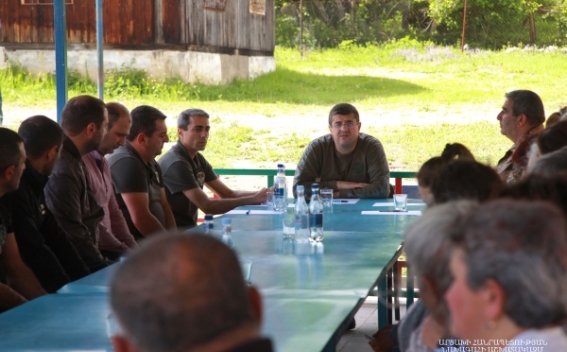 On May 4 President of the Artsakh Republic Arayik Harutyunyan visited Haterk, sub-region in Martakert and Aknamerd, community in Shahumyan region.
The head of state met with the local population and the leadership of the regions, discussed the existing problems in the communities, the ways to solve them, and a number of programs aimed at the development of the sub-region.
The President noted that the construction works will be continued in Getavan, Zardakhach, Haterk, Zaglik, Chapar and Aknaberd, aimed at building new houses for displaced families as a result of the war, repairing old housing, creating and rebuilding the necessary infrastructure. In this context, the President emphasized the need to ensure the high quality of the work carried out, giving specific instructions for their proper implementation. They touched upon the programs aimed at the development of agriculture in the regions, the need to give them a new impetus was mentioned, during the visit.
Touching upon the security environment, the head of state once again stressed that the Artsakh Republic tries to solve the problems in that sphere by combining the efforts of the Defence Army, the Republic of Armenia, the Russian peacekeeping troops, and supports the peaceful settlement of all issues.
"International recognition of the Artsakh Republic has been and remains on the agenda", President Harutyunyan noted.