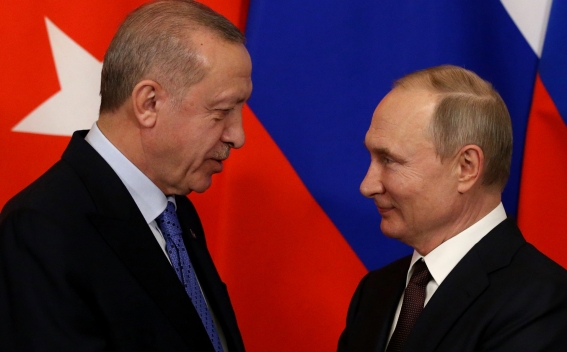 Turkish President Recep Tayyip Erdogan and his Russian counterpart Vladimir Putin discussed the situation in Jerusalem and the general environment in the zone of the Arab-Israeli conflict in a phone conversation on Wednesday, according to TASS, the NTV channel reported, citing the administration of the Turkish leader.

The Turkish president pointed out that a "similar stance by Turkey and Russia on the issue [of the status] of Jerusalem is an important message" in the context of resolving this issue. He noted the importance of statements by the Russian Foreign Ministry regarding settling the Jerusalem problem based on UN decisions and the two-state solution.

Erdogan pointed out the necessity of immediately engaging the UN Security Council in the situation between Israel and the Palestinians. In his opinion, the UN "should demonstrate hardline and decisive position in order for Israel to stop attacking" the Gaza Strip.

He separately noted that "it is necessary to hammer out the issue of sending international peacekeepers to the region in order to protect the Palestinians" and expressed confidence that "Turkey and Russia will display close cooperation on these issues at the UN."