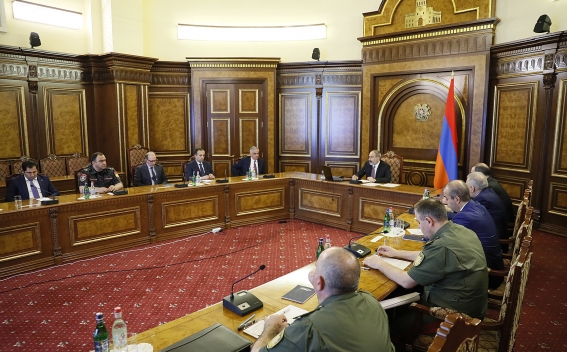 The Security Council met in the Office of Government, chaired by Acting Prime Minister Nikol Pashinyan.

I would also like to emphasize that despite my calls not to make the current situation a subject of internal political speculations, there are still such forces in our country that abide by a pro-Azerbaijani stance. In general, you know that any military-political standoff is usually combined with information warfare; now it is obvious to me that there are Azerbaijani information agents operating in the Republic of Armenia, their names can even be mentioned. Those people invited the President of Azerbaijan to attack the Republic of Armenia in 2020. Prior to these events, they suggested where the Republic of Armenia could best be attacked in order to promote their political ambitions. It is clear to me that all this is not at all accidental, and we need to investigate these cases in order to understand what is going on.

I wish to remind you once again that the thesis of the so-called Zangezur Corridor as voiced by the President of Azerbaijan has been under construction or developed in Armenia for quite a long time. And I think it is very important to emphasize that here, too, the well-known political circles are acting as Azerbaijani agents. I want to emphasize that the Republic of Armenia has never discussed and will not consider the issue of establishing such a corridor. The discussions we have had are public; they are reflected in the official information related to the activities of the tripartite working group on the January 11 joint statement.

I wish to stress that the opening of regional communications is on our political agenda, but it can in no way have anything to do with the “corridor” propaganda, which is being propagated by specific political circles in Azerbaijan and Armenia.

There is such a nuance in terms of border adjustment. Azeri propaganda has recently been trying to promote the idea that border adjustment should take place in a bilateral format. It is impossible for the simple reason: Armenia and Azerbaijan, in fact, have no relations with each other.

Whereas the opening of communications and border adjustment should take place in a tripartite format, on which several agreements have been reached so far, I reckon that the breach or disruption of those agreements is just the reason behind the provocative actions undertaken by the military-political leadership and the armed forces of Azerbaijan.

Now, I would like to refer to further actions. The negotiations continued late into the might yesterday and will be resumed on Wednesday. The talks have one topic on the agenda: Azerbaijani troops must leave the territory of the Republic of Armenia. Until this happens, we consider the current situation as a crisis that poses a threat to the sovereignty, stability and territorial integrity of the Republic of Armenia, a situation stipulated in the CSTO Charter, in the Collective Security Treaty and in the Crisis Response Regulations. All the aforementioned mechanisms, as well as the relevant Armenian-Russian allied mechanisms shall be activated until our legitimate claim is complied with.

We must act to reach a solution through political means. In case we fail to achieve such a result, the military-political mechanisms will have to be launched under the same logic. I mean that the Collective Security Treaty and the Armenian-Russian agreements envisage such functions as should be implemented in similar cases, and using our legitimate right, we have activated those functions.”

For information: Tensions rose in some sections of the Armenian-Azerbaijani border following the Security Council meeting.