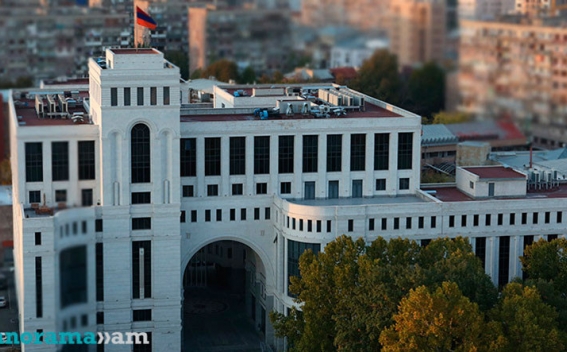 Armenia’s foreign ministry has commented on the adoption by the European Parliament of a resolution on Armenian prisoners of war held in the Azerbaijani captivity. The comment runs as follows:

"On May 20, the European Parliament by an overwhelming majority passed a resolution on Armenian prisoners of war held in Azerbaijani captivity, which also touched upon the broader context of the Nagorno-Karabakh conflict and regional security.

The Resolution stipulates a clear demand for the immediate and unconditional release of all Armenian prisoners of war and civilians captured during or after the war. An addressed call is made to the Azerbaijani government to provide an exhaustive list of all persons held in its captivity, information on their health, including of those who have died in captivity.

At the same time, a grave concern was expressed about credible reports, according to which Armenian prisoners of war and other captive persons have been and are being held in degrading conditions, and that they have been subjected to inhuman treatment and torture. In this context the European Parliament condemns all instances of torture and enforced disappearances.

The resolution also calls to refrain from hostile rhetoric or actions aimed at aggravating the situation, and condemns the opening of the so-called "Trophy park" in Baku, by urging it to be closed without delay.

The need to ensure access of humanitarian assistance to those in need, the security of Artsakh Armenians and the cultural heritage of Artsakh is outlined.

The need for the settlement of the Nagorno-Karabakh conflict under the auspices of the OSCE Minsk Group Co-Chairmanship and on the basis of Basic Principles presented by them, including equal rights and self-determination of peoples with the objective of determining the future status of the Nagorno-Karabakh was also emphasized.

The provisions of the European Parliament on the Nagorno-Karabakh conflict, including humanitarian issues, are extremely important. The European Parliament has stated that violations of humanitarian law by Azerbaijan amount to enforced disappearance. The abovementioned violations are war crimes and Armenia will undertake necessary steps to bring the perpetrators of those crimes to international justice.

The Resolution clearly states that by intruding in the territory of Armenia on May 12, Azerbaijan violated international law and the territorial integrity of Armenia. In this context particular concern was expressed towards the statements by Azerbaijani representatives, including the president, which appeared to raise territorial claims and threaten the use of force. The European Parliament views these actions of Azerbaijan as steps aimed at undermining the efforts towards security and stability in the region.

This resolution of the European Parliament once again proves that it is impossible to resolve the Nagorno-Karabakh conflict by force and to deprive the people of Artsakh of their inalienable rights, including the right to self-determination."