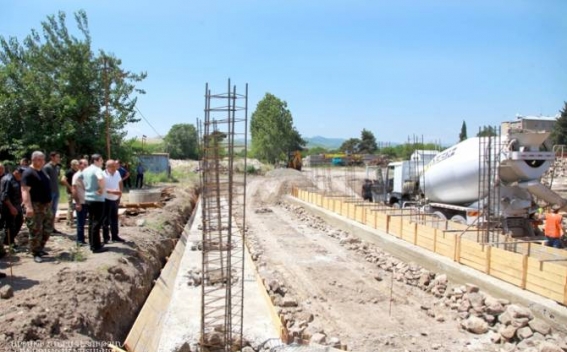 On May 30 President of the Artsakh Republic Arayik Harutyunyan visited the regional centre of Martuni and got acquainted with the construction works carried out in the city.
The head of state first visited the multi-apartment district under construction with a private investment program, where in two years "Ferzit" construction company will build four five-storey buildings with 3 and 4-room, 116 apartments. According to the head of the construction company, the buildings will have basement floors. Playgrounds, parking will be built, the neighboring area will be improved. Along with the construction, the old pool (beach) of Martuni will also be renovated.
President Harutyunyan toured a number of districts of the regional centre, where active restoration works are being carried out and got acquainted with the process. Arayik Harutyunyan stressed that the city of Martuni, as the most affected by the war and actively developing community, will always be in the centre of the government's attention. In this context the President gave a number of instructions, particularly, taking into account the existence of a newly launched overhead line to ensure a stable electricity supply to the city, he instructed to provide the streets of Martuni with full night lighting in a short period of time. According to another instruction, all the emergency houses will be dismantled and fast-moving houses will be built for the residents.
During the visit, the President of the Republic met with the relatives of the soldiers who perished during the war in 2020 and received posthumous high state awards. Handing them the state awards, Arayik Harutyunyan voiced his gratitude to everyone, noting that the government will always support the families of all the victims.
President Harutyunyan also visited a sapling walnut garden near Martuni.