President of Artsakh Paid a Working Visit to Askeran Region 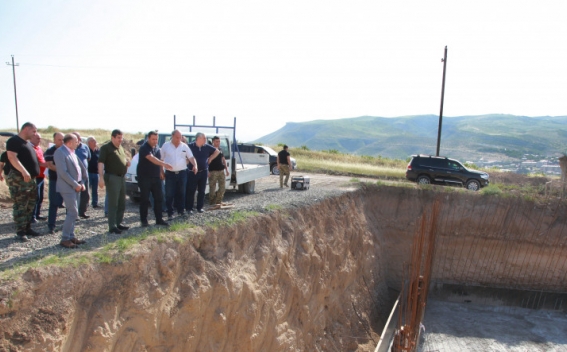 On June 2 President of the Artsakh Republic Arayik Harutyunyan paid a working visit to Askeran region.
The President first got acquainted with the construction works of the main junction of the Karkar River, which is being built with state funds. According to the responsible people, the program is implemented according to the schedule. The President instructed to increase the capacity of the workforce and to put the system into full operation by the end of the year. As a result, more than 2,000 hectares of land in the lowlands of the subregion will be irrigated, which will significantly change the density of agricultural production in the area.
During the visit, the President met with the residents of Khnapat and Khramort communities. Both security and socio-economic issues were discussed during the visit. Highly appreciating the resettlement of dozens of displaced families in the two communities, the President stressed the need to continue the process, promising that the Government will intensify its efforts in this direction. Touching upon the infrastructure projects, Arayik Harutyunyan noted that the road leading to Khramort will be asphalted this year, the paving of intra-community roads will continue, and all the issues raised will be properly solved.
The President of the Republic was accompanied by Armen Tovmasyan, minister of economy and agriculture, Hayk Khanumian, minister of territorial administration and infrastructure and others.