President of the Artsakh Republic Met with the Heads of the Communities of Qashatagh Region, in Yerevan 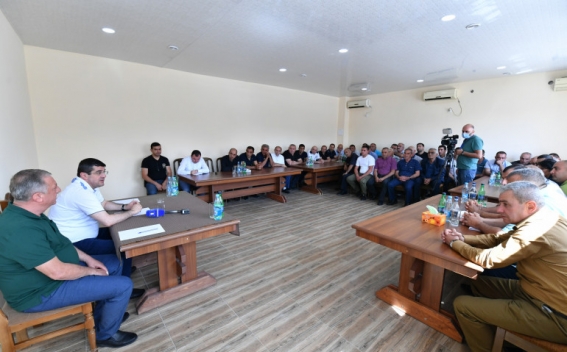 On June 8 President of the Artsakh Republic Arayik Harutyunyan had a regular meeting with the heads of the communities of Qashatagh region, in Yerevan.
The head of state noted that the problems of the displaced residents are in the center of the Artsakh government's attention, the purpose of the traditional meetings is to identify all the problems in time, to try to offer operative solutions within the available possibilities. Touching upon the issues of compensating the movable and real estate of the residents by the joint efforts of the Governments of the Republic of Armenia and the Republic of Artsakh, President Harutyunyan noted that a commission has been set up to assess their volumes and at the end of the year, it will provide some monetary income at the annual interest rate.
Arayik Harutyunyan stressed that the return of all displaced citizens to Artsakh remains one of the Government's priorities. And the families that will establish permanent residence in Artsakh will receive an apartment, relevant property and necessary support from the state, to carry out economic activities.
During the meeting, President Harutyunyan inquired from the community leaders about the problems of the people of Qashatagh who took refuge in Armenia, listened to the proposals aimed at their solution, answered their questions.
Հայերեն На русском