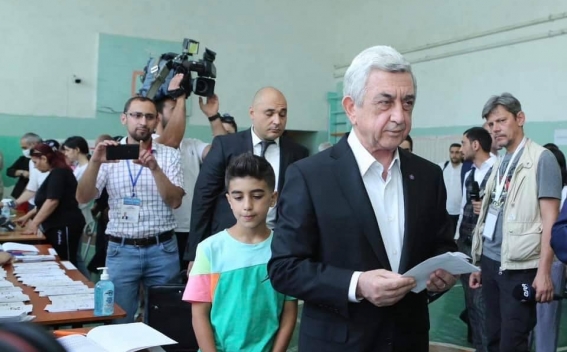 Speaking to reporters he said he has voted for secure, sovereign, economically developed Armenia and Artsakh, for powerful army, inviolability of Armenian borders and reconciliation of the society.

Referring to the violations, Serzh Sargsyan said that the whole law enforcement system, especially in the last days of campaign were using force being obviously directed.

"Unclear summoning to departments, illegal search without court's ruling, illegal arrests. We are attentively following the developments. I believe we will make an interim statement and then the main one immediately after the voting ends," Sargsyan said.

Asked whether he sees opportunity of cooperation with Armenia bloc, Sargsyan said he will speak about it after the results of the elections.
"It is early to speak now," he said.

As to how he sees the future if Nikol Pashinyan is re-elected, Sargsyan said, "There is no future in such case."