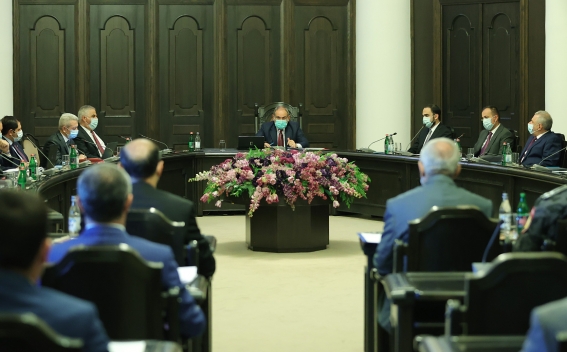 The government adopted a decision "On temporary ban on imports of products of Turkish origin to the Republic of Armenia," which suggests extending the ban on Turkish imports for another 6-month period. The reference note says that the ban on Turkish imports is not only meant to impose an economic sanction on Turkey, but it also has a security component as we thereby cut part of financial inflows to Turkey’s treasury. Acting Minister of Economy Vahan Kerobyan says the decision stems from the EAEU Customs Treaty’s relevant provision, which provides that EAEU-member states may unilaterally apply non-tariff trade measures for a maximum of 6 months.

The government amended one of its previous decisions to facilitate the formation of contractual relations between the parties following the tender announced for the design, financing, construction, management and operation of the Ayg-1 200-megawatt photovoltaic power plant in the administrative territory of Talin village, Aragatsotn Marz.

Highlighting the program’s importance, Acting Deputy Prime Minister Tigran Avinyan advised that construction activities started as early as in 2019. "We are talking about the construction of a 200 MW solar photovoltaic station. In fact, we have a winner, which offered 2.9 cents for 1 kW of energy, which is a fairly low price. Ayg-1 is a large-scale investment program to a total cost of about USD 174 million," Tigran Avinyan said.

The Acting Deputy Prime Minister noted that a process of land allotment is underway under the project. "The 1.5-year extension of the proposed deadline has to do with the required preparations - paperwork, earthwork, etc., after which construction will start. We are planning to commission the 200MW power plant by 2025," Tigran Avinyan concluded.

Referring to the decision, Nikol Pashinyan noted: "This is an important topic in the sense that there was a lot of talk during the pre-election period about well-known international corporations being reluctant to invest in Armenia. Masdar is one of the most influential global companies in the given field. In fact, we have launched a large-scale investment program, which should have a positive impact, not only in terms of economy, but also in terms of investment attractiveness for international partners."