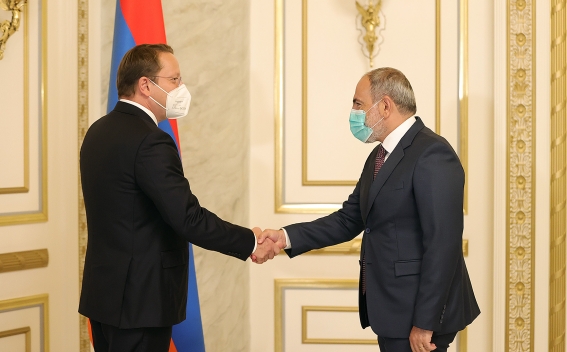 Appreciating the visit, Nikol Pashinyan said it reflects EU’s interest in developing cooperation with the Republic of Armenia. “Armenia is equally interested in developing multifaceted relations with the European Union,” the Acting Premier emphasized. In his words, the crisis caused by the 44-day war unleashed by Azerbaijan was followed by early parliamentary elections, which were assessed as democratic by international observers.

“In fact, for the first time in our country, democratic processes intervened as a medium for dealing with an internal crisis, while formerly elections used to generate a crisis in Armenia. Thus, a very important institution has been established in our country – the institution of elections, which was facilitated by the European Union,” Nikol Pashinyan said.

“We highly appreciate the EU-proposed sizeable package of programs aimed at Armenia’s progress, which we assess as a response to those irreversible democratic processes taking place in our country,” Nikol Pashinyan said.

Olivér Várhelyi expressed hope that the global coronavirus crisis is over and that the parties can start implementing programs aimed at the post-crisis future. “We wish to participate in the development of Armenia’s democratic institutions and economic recovery. We are prepared to contribute to your country’s drastic economic and social recovery in close cooperation with the Government of Armenia,” the European Commissioner for Neighborhood and Enlargement said and went on to underscore that in the near future they will be working with the Armenian side on large-scale economic and investment programs.

Mr. Várhelyi noted that the package of 1.6 billion out of a total USD 2.6 billion envisaged for Armenia will be funneled towards implementing a 5-program in the following areas: strengthening of democracy, economic development, support of small and medium-sized businesses, energy, infrastructure, etc. “We can make a big difference with the aforementioned large-scale investments. These are powerful and large-scale projects that we can work together to make a reality,” Olivér Várhelyi pointed out.

Highlighting the effective implementation of the EU-proposed investment package, Nikol Pashinyan noted that the Eastern Partnership’s forthcoming summit will give new impetus to EU-Armenia interaction, including the visa liberalization process and GSP+ cooperation.

The Acting Premier next referred to the post-war situation, stressing the need to ensure the repatriation of Armenian prisoners of war, and hailed the European Union’s efforts, especially European Council President Charles Michel’s contribution in ensuring the return of 15 Armenian prisoners of war. Nikol Pashinyan emphasized that Armenia is prepared to take humanitarian steps and stressed the importance of joint efforts of the international community to preserve the Armenian historical and cultural heritage in Nagorno-Karabakh.

Summing up the meeting, the Acting Prime Minister stressed that the large package offered by the EU is considered by the Armenian government not so much as an opportunity to attract financial resources, but as a gateway for introducing European values in our country.