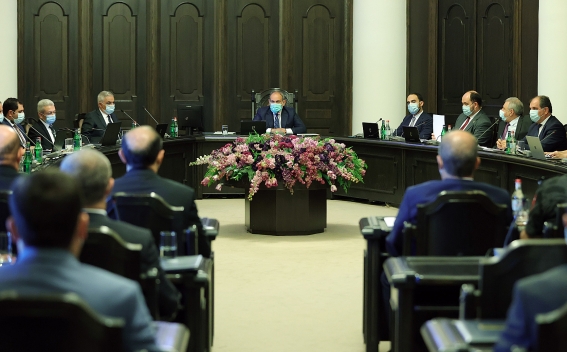 The Government approved the Medium-Term Expenditure Framework for 2022-2024 and the Debt Burden Reduction Program of the Government of the Republic of Armenia for 2022-2026, which seeks to ensure an average economic growth of 7% annually. The Government needs to build up the country’s economic potential, which in turn will take up the potential growth of the economy to a higher level. To this end, an effective investment policy should be implemented with the bulk of investment to be funneled towards the export sector, high technologies and infrastructure in order to achieve high capital efficiency. Increased labor and capital productivity is a prerequisite for ensuring high economic growth, which can be achieved through new technological solutions, a better business-investment environment and coordinated academic interventions. This calls for an average factor productivity growth of 5.3%.

Export is another factor conducive to that goal. The higher growth of investment will be followed by higher growth of exports of goods and services in the foreseeable future. These developments will reflect the impact of a significant improvement in the productive component. At the same time, the share of exports in GDP will be enhanced. Fiscal policy will be aimed at reducing the debt burden and promoting long-term economic growth. Given the above high economic growth target, the government plans to smoothly reduce the debt burden. Reducing the debt burden below the threshold of 60 percent, as suggested by fiscal rules, will help create a “fiscal space” to respond to possible shocks.

Nikol Pashinyan called everyone’s attention to a number of factors. “First of all, we are legally bound to adopt a medium-term expenditure framework today. Second, we have to comply with the established procedure in the face of new realities. We will have to adopt the government’s action plan in the near future. The government shall be guided by Civil Contract party’s electoral program. Therefore, the 2022 state budget, the government’s program and the relevant action plan must be based on the Civil Contract party’s electoral platform.

No matter a government department is supervised by non-partisan officials or by people with political affiliation: all available resources should be used to implement the Civil Contract party’s electoral program. That is what we have to do in the next 5 years. At the same time, I cannot rule out that new programs may come to complement the program.”

According to the Acting Prime Minister, the Medium Term Expenditure Framework is a flexible instrument that should be adopted and start working today. “Instructions have been given on the draft government program and the government’s action plan. Finally, the 2022 budget must be formed according to that logic,” Nikol Pashinyan said, noting that today we need to think about the implementation of measures under the pre-election program. “In particular, at the previous discussion I instructed to ensure the construction of new schools and kindergartens. I expect that by the end of this year we will have approved at least a few dozen such projects,” the Acting Prime Minister pointed out.

The Executive approved the draft law “On Amending the RA Law on State Duty,” which is supposed to streamline the foreign trade of goods of strategic importance (copper-molybdenum concentrate, ferromolybdenum). According to the bill, part of the proceeds generated from the exploitation of the subsoil shall be used to develop the manufacturing industry, build up strategic assets in the mining sector, and strengthen the industrial value chains. In particular, it is planned to expand the value chain in the field of copper processing by initially launching the production of high purity cathode copper, and then ensuring rapid development of the ecosystem of related products.

In order to develop environmentally clean and safe technologies amid the ongoing price hikes in the global market of non-ferrous metals, it was proposed to establish a state duty on copper, molybdenum ore and ferromolybdenum for the issuance of licenses, permits or certificates. The proposed licensing rates shall be applicable depending on the changing demand for these metals on the global marketplace.

Acting Deputy Prime Minister Mher Grigoryan noted in this connection that the bill implies some implementation risks. “We have a 100 percent consensus on goals, but we may face risks while implementing this tool.” Nikol Pashinyan noted that the government is there to manage the risks and to take actions in the best interest of the country. “I understand the potential risks. Nevertheless, all relevant legislative amendments should be developed and introduced as they are not at odds with the logic of anticipated risks,” the Acting Premier concluded.