We Will Stand Until the End, but Will Never Be Part of Azerbaijan – Artsakh Foreign Minister (ARMENPRESS) 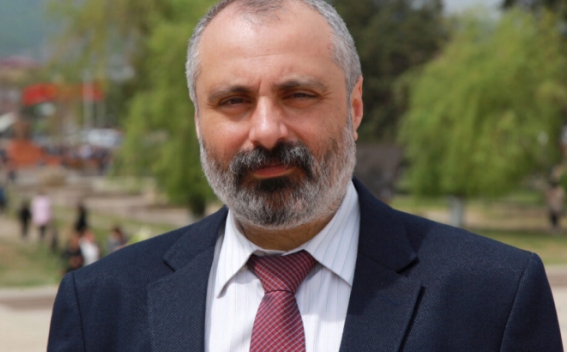 After Artsakh found itself in the current situation by the recent war, Azerbaijan is taking practical steps to occupy Armenia’s Syunik province, opening a new, “the Zangezur geopolitical front”, Foreign Minister of Artsakh Davit Babayan said in an interview to ARMENPRESS, calling for soberness and urging to understand what is taking place, to be ready for new aggression by Azerbaijan.

He stated that the position of Artsakh has remained unchanged – Artsakh will never be a part of Azerbaijan.

-Mr. Babayan, the President of Azerbaijan has announced that according to their “non-official information” “Armenia is not ready” for the signing of the “peace agreement” with Azerbaijan. Commenting on this statement, Armenia’s caretaker deputy prime minister Tigran Avinyan noted that as long as the status of Artsakh is not solved yet, it would be difficult to talk about other solutions. What do you think, what agreement is Aliyev talking about? What is the purpose of making such statement and to what extent it’s appropriate now to talk about the signing of a peace agreement, taking into account the current complex situation?

-I would say the following. In general, we need to concentrate not on the legal ideas as stated by Aliyev, meaning treaty, agreement, peace, etc, but on the new topic which is already being circulated, which was very predictable and we are talking about it for years. It seemed, everyone was understanding this, but now they all are surprised on what is happening. Aliyev has opened a new geopolitical topic, a new geopolitical front – the Zangezur front. And this has already become a matter of discussion, a reality. For many years we have been stating that if one day Artsakh weakens, Armenia will be under a mortal danger, some people were thinking that Artsakh is a burden and getting rid of it they would live well, woulddo trade. But it’s not and will not be so. Look, Artsakh has weakened, and now the Zangezur front has opened. Now Azerbaijan is in the process of opening the Zangezur geopolitical front.

-What does it mean?

-It means that after Artsakh found itself in this situation, from geopolitical, psychological, economic and other terms, we are in a “recovery department”, that shield has been broken, but has not been destroyed, and now another front has opened.

What do they do? They were always stating that “Zangezur is Azerbaijani territory” and similar absurd things. They have now passed to its practical implementation. They have created the “Eastern Zangezur economic region”. I want to note that the creation of this region is the first step. Later they will turn them into provinces or vilayets. But the problem is that there has never been the “Eastern Zangezur economic region” or any economic, cultural, administrative-territorial unit in Azerbaijan called Zangezur. They have now created that economic region and tomorrow will turn it into an administrative-territorial unit.

We must sober up, understand what is happening and be ready. They are very well prepared. We also must take into account this. They are approaching to the work step by step. If Aliyev wants peace treaty, he will say “give me the Western Zangezur”, “give me Yerevan”, etc. The directions of their main geopolitical attacks are very clear. They are the most honest enemies, they have never hidden their true intentions.

-Caretaker Prime Minister of Armenia Nikol Pashinyan has stated that Azerbaijan is making statements about the so-called “corridor” for distorting the activity of the trilateral deputy prime ministerial working group and preventing the unblocking of regional communications.

-Look. We need to distinguish between transportation communications and geopolitical concept. He doesn’t speak about a road passing through Meghri, he talks about the “Zangezur corridor”, “Western Zangezur”, “Eastern Zangezur”. This is already geopolitical.

-Yerevan says corridor not, but a road may open. What do Azerbaijanis mean by saying “corridor”?

-According to them, the “corridor” is the first step of merger of “Western Zangezur”. We need to understand in this way.

-So you think that after occupying most of the territories of Artsakh, Azerbaijan will start the occupation of Syunik?

-It has already started, not sharply, but gradually.

-But, excuse me, in such situation there are talks over peace agreement, opening of roads, unblocking transportation communications, demarcation, delimitation. In this situation, when, as you said, Azerbaijan has in fact started implementing its program of occupying Syunik, don’t you think that such statements are strange?

-Has Aliyev ever hidden his intentions? He openly announces that. There is nothing strange, because there are different approaches, views and perceptions.

-After the war Yerevan says that the priority is the clarification of the status of Artsakh, while Azerbaijan is making different statements. Where is Artsakh in these talks? The Republic of Artsakh is no more a subject? What is the position of Artsakh?

-The position of Artsakh has remained unchanged: we will never be a part of Azerbaijan. Everyone needs to understand this quite well. The recent visit of foreign ambassadors accredited in Azerbaijan to Shushi is unacceptable for us. We say that there are two options here: either we must stand until the end or must leave totally. There is no other option. We will not be a part of Azerbaijan. This is clear and this is our position.

-In this case, how does Stepanakert imagine the status of Artsakh in the near future, taking into account the military-political situation and in particular the presence of Russian peacekeepers in Artsakh?

-Self-governing, independent country, a separate subject which plays its geopolitical role in the region. We must act as a geopolitical subject.