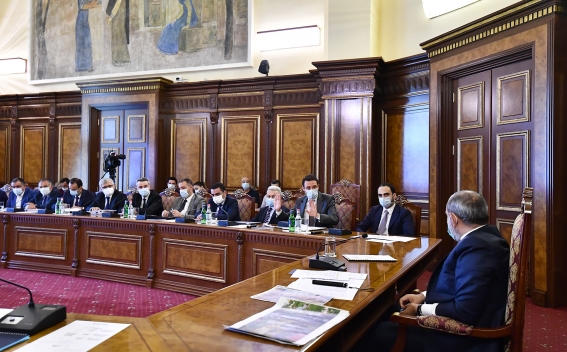 Acting Prime Minister Nikol Pashinyan chaired a consultative meeting to discuss issues related to the implementation of a number of investment programs attended by the Ministry of Economy and the Investment Support Center (ISC). Heads of government departments, as well as representatives of the companies implementing the programs were in attendance.

In his opening remarks, Nikol Pashinyan stated, in part: “We have come together to discuss the bottlenecks we may face in implementing investment programs. In fact, today’s meeting brings together the investors and the representatives of the organizations concerned to see whether they can tackle the problems. We need to understand the root causes behind the problems that have aroused specific concerns in the business community.”

Nikol Pashinyan noted that the purpose of the discussion is to hear the problems that hinder the implementation of programs and find appropriate solutions. The first investment program, which was presented, referred to the construction of a new multifunctional complex at the beginning of Azatutyun Avenue in Yerevan. With an estimated cost of USD 10 million, the project is supposed to create some 220 new jobs. In the meantime, there is a water canal of historical and cultural significance running across the construction area.

Yerevan Mayor Hayk Marutyan, Acting Minister of Education, Science, Culture and Sports Vahram Dumanyan, Deputy Minister Ara Khzmalyan, Director of the Institute of Archeology and Ethnography of the Republic of Armenia Pavel Avetisyan came up with clarifications about the project.

After taking note of their comments, Nikol Pashinyan gave those responsible 10-days to present to the investor the necessary guidelines and standards, as well as to amend the relevant government decision. “The businessman should get the answer to what we need to preserve and how,” the Acting Premier said.

The next investment program referred to the construction of a tourism-cultural complex in the Lusarat community of Ararat Marz. Estimated at USD 14 million, the project will help create 50 permanent and 500 temporary jobs. The investor advised that they were going to build a winery and a recreation center on the site. The problem with the project is that the complex is planned to be implemented in the area of historical Artashat.

Director of the NAS RA Institute of Archeology and Ethnography Pavel Avetisyan said it is necessary to see whether there are archeological assets in the mentioned area. According to Mr. Avetisyan, the archeological surveys may take at least two months to complete. Acting Prime Minister Nikol Pashinyan considered it inadmissible to implement the project on the site of the Old Artashat, which may contain archeological assets.

Nikol Pashinyan suggested starting excavation work as shortly as possible. In case there are important archeological materials unearthed in the area, the regional administration will have to offer another site in the same community for implementing the program. The investor agreed to the proposal and expressed readiness to work closely with the archeological group.

The next investment program referred to the modernization of the Children’s Railway Park in Yerevan. The project is estimated at USD 160 million. It implies rebuilding the park in accordance with international standards. The project has been discussed at the Yerevan Town Hall, and the latter came up with strong objections to its original version.

After taking note of the opinions voiced by the investor and the Mayor of Yerevan, the Acting Prime Minister suggested improving the project and developing a mutually acceptable version. Nikol Pashinyan stressed that the park should continue to be a highlight through improved infrastructure and a better environmental situation.

The Old Khndzoresk investment project was presented next, which envisages an investment of USD 32 million and over 400 new jobs. The project seeks to rehabilitate and preserve the historical and cultural assets of Old Khndzoresk and Old Goris. The developer noted that the project is being hindered due to illegal facilities available on the plots.

The representatives of specialized agencies came up with explanations on this issue. The Acting Prime Minister considered unacceptable preventing the implementation of an investment program due to illegal buildings. He stressed that the government will adopt an appropriate decision.

The meeting next referred to the following projects – establishment of a ski resort on Mount Aragats, construction of an international standards-compliant hotel complex in Kapan, development of tourist facilities near the Devil’s Bridge, construction of a multifunctional Czech complex - Grand Bohemia - in Yerevan, as well as investment projects in the fields of industry and energy. Innovative solutions to the problems raised were discussed during the meeting.

The Acting Premier gave specific instructions to those in charge, emphasizing that the issue of improving Armenia’s investment framework, stimulating and attracting investments is a priority for the government, and continued work has to be done with all investors.