Ambassador Visits Armenian-Azerbaijani Border, Says US Rejects Use of Force in the Case of Demarcation 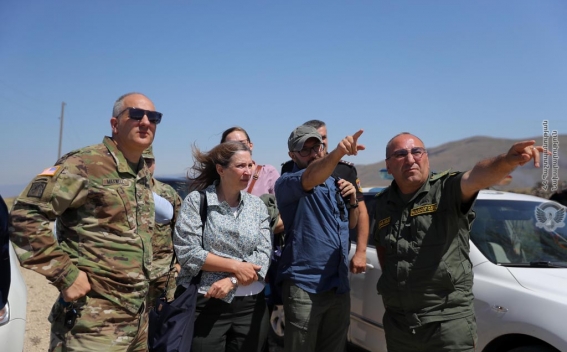 Today US Ambassador Extraordinary and Plenipotentiary to Armenia Lynne Tracy visited Gegharkunik Province along with representatives of the Armenian Ministry of Defense. Commander of the military formation, Major General Arayik Harutyunyan told the Ambassador about the current situation on the Armenian-Azerbaijani border, after which he organized a visit to the borderline in the Verin Shorzha sector of the border, as reported the Armenian Ministry of Defense.

Ambassador Tracy reaffirmed the US government’s concern about the incidents taking place along the length of the Armenian-Azerbaijani border and emphasized that the US rejects the use of force in the case of demarcation, News.am reports.

Tracy also emphasized that the US, as a co-chairing country of the OSCE Minsk Group, remains strongly committed to working with all the sides in order to achieve a long-term political settlement of the Nagorno-Karabakh conflict.

At the same time, according to Tracy, the US requires that the sides return to the negotiations at the level of Co-Chairs of the OSCE Minsk Group as soon as possible.