It is Obvious from this Picture that People are Under the Direct Target of the Azerbaijanis: Tatoyan 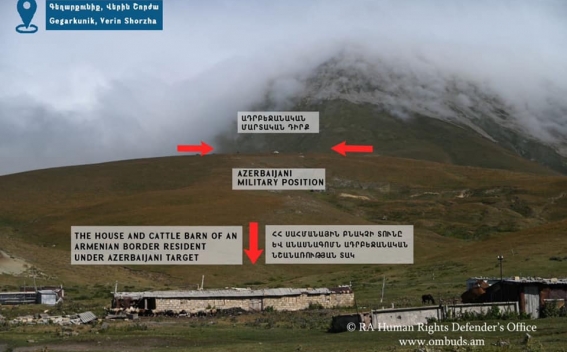 "This is the civlian community called "Saradeghy" of Verin Shorzha village in the RA Gegharkunik province, and this picture presents one of the resident’s home where they live with the family and have their cattle barn. The Azerbaijani military position is immediately above civilians.

It is obvious from this picture that people are under the direct target of the Azerbaijanis. These are the situations I mean, especially when I say that the presence of their armed forces is in itself a violation of the right to life (along with other rights, of course).
Yesterday we were in this particular place when Azerbaijani shootings started. Azerbaijani Military fires from this position as well; one of the residents' cattle was shot dead on July 23."
Հայերեն На русском