Arayik Harutyunyan Instructed to Increase Salaries and Social Payments by 20% on Average from January 1, 2022 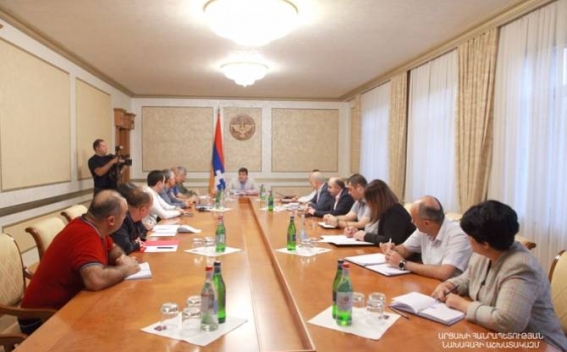 On September 8 President of the Artsakh Republic Arayik Harutyunyan convened an enlarged working consultation dedicated to the identification of social sector issues, the development and implementation of programs to be carried out in their direction, as well as a number of issues in the fields of education and healthcare.
First of all, the new program of providing financial assistance to the displaced residents as a result of the war unleashed by Azerbaijan in 2020, which is already being finalized, was discussed during the meeting.
As a result of comprehensive discussions, a decision was made to provide additional one-time financial assistance to a large part of the population of Artsakh with the help of the state budget of the Artsakh Republic, which will allow to mitigate the existing social and living difficulties in the post-war period.
The head of state noted that in addition to one-time financial assistance programs, it is necessary to develop and implement a toolkit that will allow to significantly contribute to the provision of social guarantees and raise the living standards of the people of Artsakh. In this regard, Arayik Harutyunyan first of all, instructed the officials of the relevant bodies to review the amounts of all salaries, pensions and other social payments paid from the state budget from January 1, 2022, increasing them by an average of 20 percent.
The President of the Republic also inquired about the reforms in the healthcare system. He instructed to complete the free healthcare program in a short period of time, at the same time working to modernize the healthcare system and increase its efficiency.
Touching upon the education sphere, the President of the Artsakh Republic expressed his dissatisfaction with the implementation of the program of reimbursement of tuition fees for undergraduate students of the current system of Artsakh universities. Arayik Harutyunyan instructed to give a solution to the mentioned issue, as soon as possible.