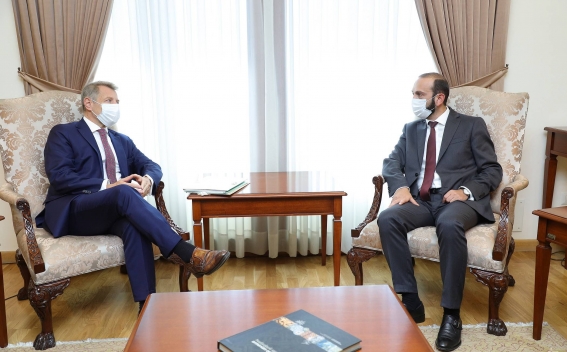 On September 13, Minister of Foreign Affairs of the Republic of Armenia Ararat Mirzoyan received Co-Chair of the OSCE Minsk Group Stéphane Visconti (France) and Sylvain Guiaugué, Deputy Director of the Continental Europe Department of the Foreign Ministry of France.

The main subject of the discussion was the wide range of issues on the Nagorno-Karabakh peace process.

Ararat Mirzoyan drew the attention of the French Co-Chair to the humanitarian situation resulting from the 44-day war, emphasizing the need for the immediate and unconditional repatriation of Armenian prisoners of war, captured civilians and others detained in Azerbaijan.

The interlocutors stressed the need to resume the Nagorno-Karabakh peace process under the auspices of the OSCE Minsk Group Co-Chairmanship. In this context, Minister Mirzoyan noted that the Armenian side supports the position expressed in the joint statements of the OSCE Minsk Group Co-Chairs following the 44-day war, particularly, the need for a lasting and sustainable settlement of the conflict based on well-known principles.