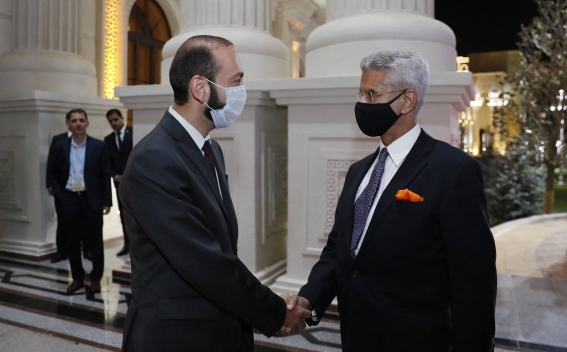 The interlocutors touched upon a wide range of bilateral agenda, commending the high level of traditional Armenian-Indian warm relations based on close ties. Both sides expressed readiness to promote the cooperation to a qualitatively new level.

The sides agreed to start substantive discussions on cooperation on specific programs in various fields. In this context, the importance of activating high-level reciprocal visits was emphasized.

Ministers Mirzoyan and Jaishankar commended the mutual support of Armenia and India within the framework of international organizations.

The interlocutors also discussed the current developments around the “North-South” international transport corridor.

The Foreign Ministers of Armenia and India touched upon regional and international security issues. Minister Ararat Mirzoyan briefed his counterpart on the situation resulting from the infiltration of the Azerbaijani armed forces into the sovereign territory of the Republic of Armenia. In this context, the Minister commended India's principled position, as well as its continued support for a peaceful and comprehensive settlement of the Nagorno-Karabakh conflict within the framework of the OSCE Minsk Group Co-Chairmanship. Minister Ararat Mirzoyan reiterated Armenia's position on supporting India in the issue of Jammu and Kashmir.

The sides also discussed the situation in Afghanistan.

The meeting of the Foreign Ministers of Armenia and India took place in the capital of Tajikistan, Dushanbe, where Ararat Mirzoyan is to participate in the works of the CSTO bodies.