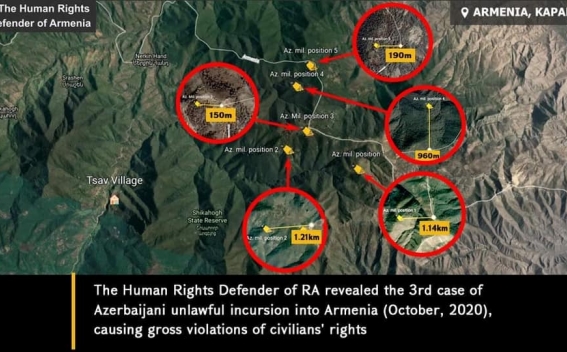 Our ongoing fact-finding activities have revealed that during the [Artsakh (Nagorno-Karabakh)] war, in the end of October 2020 Azerbaijani armed forces incurred the sovereign territory of RA in the border area near the village of Tsav, Kapan community, Syunik province, causing a real threat especially for the residents of the villag[e]s Nerkin Hand and Tsav in Kapan.

With the current report, I also publish the incursions of the Azerbaijani armed forces on the Google map in yellow, with a description of at least 5 specific locations. According to the Google Map measurement, the intrusions are located in the depths of the RA sovereign territory near the village of Tsav, at a distance of 150 m, 190 m, 960 m, 1140 m and 1210 m in a straight line from the border envisaged by it.

They are, in particular, in areas where there are grasslands and pastures. As a result of the incursion, civilians were deprived of the opportunity to use those lands and earn a family income.

On this manner, the Azerbaijani armed forces openly violate the rights of the residents of Kapan community, especially Tsav and Nerkin Hand villages, to life and safe living, to property, to earn a family income, and other vital rights. Their presence is a real threat to people's peaceful lives.

Meaning, the presence of the Azerbaijani armed forces in the sovereign territory of the Republic of Armenia, in the border area near the village of Tsav in Syunik, is clearly devoid of any legal title.

In parallel to all this, the Azerbaijani hatred and enmity, policy of fascism is continuing.

Therefore, this issue should also be referred to the international instances, such as the European Court of Human Rights, the UN International Court of Justice, and other instances. It should be a mandatory component in order to restore the violated rights of the RA border residents.

Restoration of the rights of the border residents of the Republic of Armenia requires immediate withdrawal of the Azerbaijani armed servicemen.

There should be no Azerbaijani armed servicemen near the villages of Syunik and Gegharkunik, between the roads of Syunik communities.