Feast of the Evangelists Sts. Mathew, Mark, Luke and John 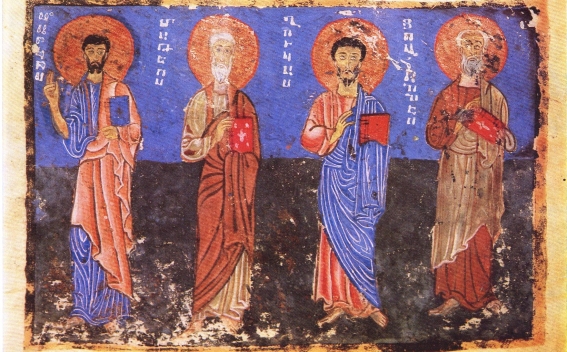 Evangelist St. Mathew is one of the twenty apostles of the Lord. He is the author of the first Gospel. The name of Matthew is the Greek version of the Hebrew name meaning God-given. His Hebrew name has been Levi. In the past he has been a tax collector in Capernaum. Then obeying to God’s will he has sold his property, distributed the money to the poor and has become on the followers of Jesus Christ. He has preached the Word of God in Parthia and Palestine, Qahana.am writes.

Evangelist St. Mark was the nephew of Barnabas. He was born in Jerusalem. He was named also John. It was the house of his mother – Mary that was the place of prayer for the apostles. It is supposed that it was the place where Our Lord Jesus Christ had the Last Supper and where the Church was founded during the Pentecost. He has been the interpreter of St Peter, as well as the friend of St. Paul and Barnabas. He is the author of the shortest Gospel. He has preached the Word of God in Egypt, where he has been martyred he is the founder of the Coptic Orthodox Church.

Evangelist St. Luke is the author of the third Gospel. He was born in Antioch. According to the tradition he is one of the seventy-two disciples of Jesus Christ. According to St. Paul he has been a physician. Listening about the Lord’s Preaching, Luke goes to Palestine and follows the Lord. He has preached the Word of God in Achaia, Libya, Egypt and Teba. He has written “The Acts of the Apostles” upon the request of Theophilos of Rome. According to the tradition he has been martyred in Teba.

Evangelist St. John is the author of the fourth Gospel, three letters and the Revelation. He deserved the title of the “beloved disciple” of Christ. He was the son of the fisherman Zebedee and the brother of James. He is considered to be one of the two disciples of St. John the Baptist who followed Jesus (See Jn 1:37). Afterwards the Lord called him to Galilee and gave him the authority of apostle. John became one of the closest Disciples of Christ. Together with James and Peter he witnessed the “transfiguration” that came over Jesus while He was praying on a high mountain named Tabor, went to the valley of Gethsemane. Together with St. Mary, Holy Godmother, he stood near the cross and at the moment of crucifixion Jesus asked him to take care of the Holy Mother of God. Together with Peter he was the first who went to the tomb of Christ and later met Him near the Sea of Genneseret (or Sea of Galilee or Lake Kinneret or Lake Tiberias). Later we see him during the persecutions of Christians in Jerusalem and his success in preaching in Samaria. After the descent of the Holy Spirit John went to Asia Minor and settled down in Ephesus where he took care of the churches founded by Paul and wrote down the Gospel there. Roman Emperor Titus Flavius Domitianus (Domitian) exiled him to Patmos where he was given (and recorded) a vision from Jesus. In Patmos or Ephesus he wrote also his letters addressed to the faithful flock.

During the period of reign of Roman Emperor Nero he returned to Ephesus where he passed away in 100 AD, in Ephesus, at the age of 95.