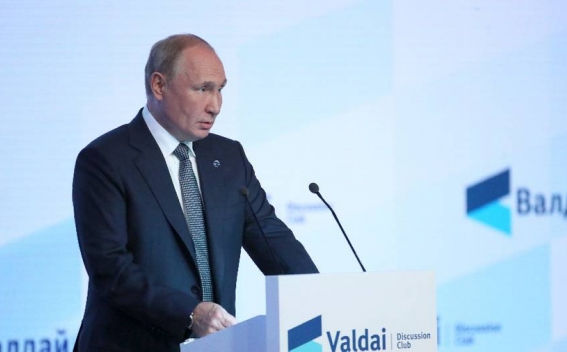 It is necessary to create conditions for the long-term settlement in the South Caucasus, Russian President Vladimir Putin said during the discussion at the Valdai Club, in response to the question of one of the participants, Armenpress reports.

The Russian leader said that first of all the political wisdom of the Prime Minister of Armenia and the President of Azerbaijan should be appreciated. "In any case, despite the tragic outcome of the incidents, they managed to stand above the current conjuncture policy and make a very responsible decision. I know that there are complaints in both countries, even statements are made addressed to their leaders. There are always some political forces which are not satisfied with anything or think that it could be done better. But a response always comes – try to do better. In any case, both Prime Minister Pashinyan and President Aliyev managed to stop the bloodshed. But the problem is not in this, although there isn’t and can’t be more important than saving human lives. There is an important aspect overall, it is necessary to create conditions for long-term settlement in the region. These conditions could be created only when the two sides accept the agreements reached, the two sides also need to assess the advantages. I want to highlight this, that is the advantage of peaceful coexistence. And here all are interested in. Azerbaijan is interested in having a normal communication with Nakhijevan and is also interested in unblocking of communications. For Armenia, the establishment of an effective economic life, the mutual cooperation in the region, including with Azerbaijan in the future, are a priority task. Armenia is interested in all these. To normalize the relations with Turkey, give them a modern nature", Putin said.

According to him, all these should lead to the primary goal – to the secure coexistence of the two states and the creation of conditions for economic development. "Whether this is possible or not? It’s possible. We have done the utmost to stop the bloodshed, but not only this. Our peacekeepers are fulfilling their duties with an honor. More than 50,000 refugees have already returned to their places. Overall, the situation in the conflict zone remains as it is. There are no major military operations. Yes, unfortunately, incidents are taking place. Yes, unfortunately, sometimes even people are being killed, but probably it’s difficult to imagine a completely perfect picture after so many years of resistance. The most important now is the final solution of the situation on the border. And here, of course, nothing can be done without Russia’s participation. We probably do not need anyone else here expect the two sides and Russia. Why? There are very simple pragmatic things, the maps which are in the General Staff of the Russian Amy. These maps show how the borders of Soviet republics were passing. Based on these documents, it is necessary to sit calmly with the two sides, there are issues here which require mutual concessions, to equalize something somewhere and exchange something somewhere. But only if that it is recognized, understandable and acceptable for both sides. Whether this can be done or not? Yes, it can be. But, of course, we support also finding a multilateral format, including the activation of works of the Minsk Group. We work on this, including with our partners", Putin said.

He added that the most important is to achieve the main goal – that is to create a secure situation and build relations in the future with a positive perspective. "But for now what we have put before us as a goal, we are managing to do it in general. And of course, we need to look at the future, see what will happen", he said, adding that the problem is in establishing relations between the two countries. "This is the most important. And I hope we will manage to do that", Vladimir Putin said.