The President of the Artsakh Republic Paid a Working Visit 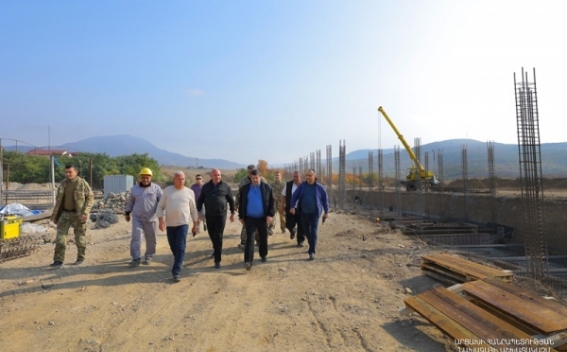 The President of the Artsakh Republic Arayik Harutyunyan started his regular working tour from the Ajapnyak district of Stepanakert, where he got acquainted with the construction works of apartment buildings being built with the funding of the ''Hayastan'' All-Armenian Fund for families, who were displaced by the war. The 15 four-storey buildings envisaged by the project, which will have a total 240 apartments with 2, 3 and 4-rooms will be put into operation in 2023.
The President then visited Dahrav community of Askeran region and followed the process of "100 Houses in Artsakh" program launched by the "Living Artsakh" foundation and the Public Television of Armenia. The officials said that more than a dozen beneficiaries have already responded to the program and they hope that their number will continue to grow.
Arayik Harutyunyan voiced his gratitude to the authors of the initiative, emphasizing that the Government of the Artsakh Republic will continue to participate in the project implemented by the pan-Armenian forces.
The President also got acquainted with the construction of highways connecting Dahrav, Astghashen and Patara communities of the Askeran region, which was started with the help of the ''Hayastan'' All-Armenian Fund. The details were presented by Aram Sargsyan, minister of urban development of the Artsakh Republic, assuring that the main earthworks is planned to complete this year, and the asphalting will be carried out next year.
During the tour, President Harutyunyan also visited the construction site of the Patara reservoir, got acquainted with the process of laying a pipeline to supply Stepanakert with potable water. Georgy Hayriyan, chairman of water committee of the Artsakh Republic assured that the works are proceeding according to the schedule and in agreement with the President's instruction, it will be put into operation in the spring of 2022.
President Harutyunyan gave relevant instructions to those responsible for the programs, emphasizing that they should be implemented consistently in time and with high quality.