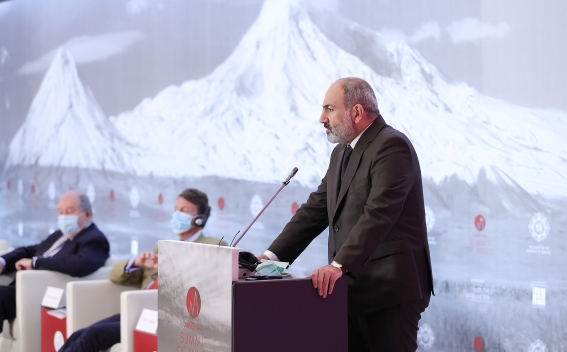 Today, Prime Minister Nikol Pashinyan participated in the opening of the "Armenian Summit of Minds" in Dilijan. The event is held under the auspices of President of Armenia Armen Sarkissian, the main partners are "The Monthly Barometer" analytical newsletter and the Central Bank of Armenia. This year it is entitled "Global transformations in the new quantum world".

"Honorable President of the Republic of Armenia,

Distinguished members of the Government,

I salute the holding of the "Armenian Summit of Minds" in the Republic of Armenia, in Dilijan, and I also salute the fact that, despite the epidemic situation, a decision has been made to hold it. You know that this event did not take place last year, but it is very important that such meetings and discussions take place, exchange of ideas take place, generation of new ideas take place, especially in this difficult and important period.

If we refer to geopolitics, we must state that geopolitics itself can be subjected to a certain modeling, because it is very similar to tides, which occur constantly and regularly. In the non-modelled world, people did not understand what was happening and for what reason, and in the modelled world all that is already becoming predictable.

In that sense, I think that today the most urgent issue that should be discussed during the "Summit of Minds" is the modeling of geopolitics, to understand how and why the processes take place. It is very important to generate mind in this direction, formulate questions and give answers. Especially in the forthcoming and the current period, there are questions that are of key importance for the past, present and future of our country, the answers to which are very important from the point of view of the future. That future will be manageable and visible to the extent that we will be able to model the geopolitics that is taking place in our region, in a narrower, broader, and generally global sense.

It is not accidental that I drew parallels with the tides. At a time when mankind did not know what was happening and why, it was perceived as a catastrophe. And when there is a clear modeling of what is happening for what, nevertheless, those processes appear in the domain of some controllability.

Once again, Mr. President, I welcome this important initiative, which has become regular. I hope that next year we will be able to organize this important event and participate without face masks. I hope that this meeting, this event will become for us a platform for modeling our economy, politics, geopolitics, so that the processes taking place around us are more understandable for us, and consequently, more manageable.

I wish success and effective process to the works of the "Armenian Summit of Minds".

This year's discussions at the Armenian Summit of Minds will focus on geopolitical changes in the world, in the South Caucasus region and the development of artificial intelligence. Among the participants are former Heads of State, heads of reputable international expert-analytical centers, organizations, tech companies, professors of prestigious universities, including Former Argentine President Mauricio Macri, Former Swiss President Micheline Calmy-Rey, President of the Skolkovo Foundation of Russia and the President of the World Chess Federation (FIDE) Arkady Dvorkovich, First Deputy Chairman of the State Duma Committee for CIS Affairs, Eurasian Integration and Relations with Compatriots Konstantin Zatulin, Director of Division on Investment and Enterprise, United Nations Conference on Trade and Development (UNCTAD) James Zhan, Deputy Director of Yandex Tigran Khudaverdyan, legendary athlete Roger Grace and others.