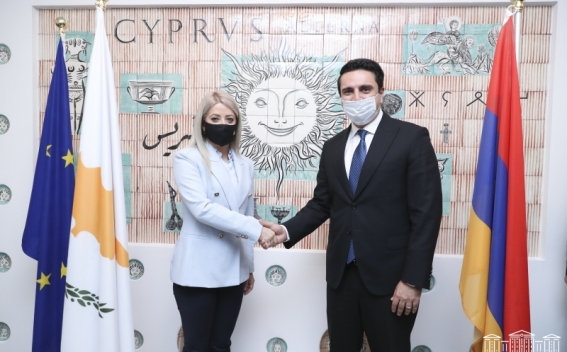 After greeting each other a talk was held over the Armenian-Cypriot centuries-old friendship, common past and the mutual aid carried out in different episodes of history.

The RA NA President underlined that Cyprus was first in Europe in 1975, and the second in the world to recognize the Armenian Genocide, set April 24 as Armenian Genocide Memorial Day, as well as responsibility for denial of genocides.

The excellent level of cooperation between the legislative bodies of the friendly countries was especially stressed, pre-indicating the perspective programmes.

The sides considered the format of the Committees on Cooperation functioning in parliaments the best mechanism for more expanding the inter-parliamentary agenda. The NA President highly assessed the exemplary cooperation of deputies of the two countries in different parliamentary assemblies for reaching the favourable solution of the important issues for each other.

The Head of the RA legislative body thanked the friendly Cyprus for the unanimous adoption of the resolution condemning the Azerbaijani aggression against Artsakh by the House of Representatives of Cyprus on 9 October 2020. He also expressed his gratitude to the President of the House of Representatives of Cyprus for receiving the participants of the 44-day war on the initiative of the MP of Armenian origin Vardges Mahtesian. Alen SImonyan considered condemnable the visit of the delegation headed by the Chair of Committee on International Relations and Inter-Parliamentary Cooperation of Milli Majlis of Azerbaijan Samed Seyidov in July 2021 to the northern part of Cyprus for taking part in the events of the 47th anniversary of the partial invasion by the Turkish side.

The President of the RA legislative body reaffirmed the full support of Armenia to the Republic of Cyprus and its people for the restoration of justice and the re-unification of brotherly Cyprus.

The sides observed as priority the launch of the format Cyprus-Armenia-Greece parliamentary cooperation, affirming that wide opportunities would be created for the development of numerous spheres of mutual interest.

The President of the House of Representatives of Cyprus assured that she would make all efforts for strengthening the Armenian-Cypriot inter-parliamentary relations. She has expressed confidence that the RA NA President’s visit is an important contribution to voicing mutual commitments and elaboration of joint programmes.

The RA NA President invited his Cypriot colleague to arrive in Armenia on an official visit.

The meeting was ended by publishing bilateral statements for the press.

The Presidents of Armenia and Cyprus also visited the ceasefire line within the framework of the official visit.