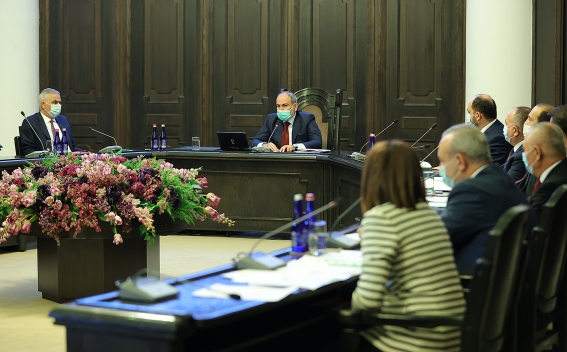 The Government made a decision on providing funding for covering the electricity, gas and communication services expenses of the population of Artsakh for November, 2021, as well as for funding the salaries, benefits, pensions, and healthcare expenditures envisaged by the state budget 2021 of the Republic of Artsakh. Minister of Finance of Armenia Tigran Khachatryan said that the funding amounts to 13 billion and 575 million AMD.

Referring to the decision, Nikol Pashinyan noted that the 2022 budget envisages allocating 144 billion AMD to Artsakh. “Over the past year, we have allocated about 120 billion AMD to Artsakh. It is also important to gradually move from support programs to development programs as smoothly as possible so that the tax collection mechanism works in Artsakh as well. And it should be noted that it works. The Government of Artsakh has had much higher tax revenues than planned in 2020, which is a very important fact. We will continue to support the Republic of Artsakh in its socio-economic recovery and development," the PM said.

The Government adopted a decision on terminating the activities of “Kosh" and "Hrazdan” penitentiaries of the Ministry of Justice of Armenia. According to the substantiation, as a result, it will be possible to ensure the most optimal and effective operation of the penitentiary system and the targeted management of the allocated financial means. According to the Minister of Justice Karen Andreasyan, 1 billion 200 million drams will be saved in 2022 as a result of the adopted decision. Nikol Pashinyan highlighted the reforms in the judicial system, particulraly, in terms of improving the conditions in penitentiaries.