Taguhi Tovmasyan Meets with Ambassador of Russia to Our Country 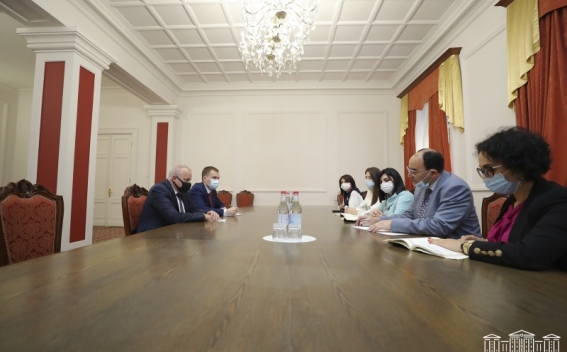 On November 1, the Chair of the RA NA Standing Committee on Protection of Human Rights and Public Affairs Taguhi Tovmasyan met with the Ambassador Extraordinary and Plenipotentiary of the Russian Federation (RF) to the Republic of Armenia Sergei Kopyrkin.

Taguhi Tovmasyan presented the authorities of the Committee led by her, noting that already about 10 effective meetings were organized, during which, particularly, issues on Artsakh and the rights of the residents of the border communities were discussed. The Committee Chair expressed readiness for cooperating with the RF colleagues. In his turn the Ambassador has noted that in the sphere of the protection of human rights constructive cooperation exists between the two countries’ relevant bodies.

Taguhi Tovmasyan spoke about the protection of human rights and the problems of restriction of the freedom of speech. In this context she has informed that in the near future she designs to organize debates on the problems of the RF citizens in Armenia, as well as the citizenship of the Armenians living in the RF, being and not being citizens of that country.

The MP voiced about the statement of the Prosecutor General of Azerbaijan, according to which, international search is announced towards the RA 320 citizens in that country. The Committee Chair has stated in the issue of that problem solution she expects the RF support, in order the Armenians being in search will be informed about the criminal cases sued towards them.

The interlocutors also referred to the effective cooperation between the Armenian Apostolic and the Russian Orthodox, the weighty role of the Armenian community in Russia, the demarcation and delimitation process of the borders between Armenia and Azerbaijan and the Artsakh status. In this respect, the activities of the OSCE Minsk Group Co-Chairs were emphasized.