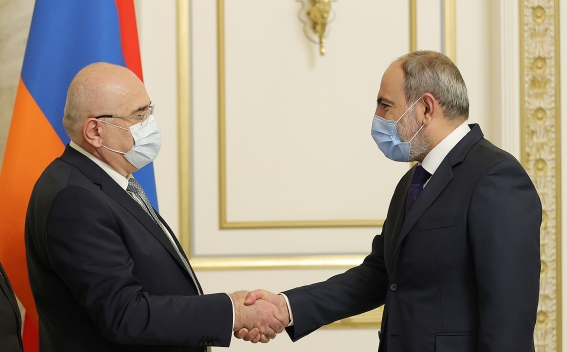 Welcoming the official visit of the representational delegation of the Georgian Constitutional Court to our country, the Prime Minister noted, “I am glad to record that a new dynamics is being observed in the relations between Armenia and Georgia. The active mutual visits, close contacts of delegations representing different sectors, this time already in the constitutional justice field, between the two countries are the evidence of this”. Nikol Pashinyan highlighted the development of cooperation and the exchange of experience between the Constitutional Courts of the two countries, taking into account the commonalities of the governance systems.

Thanking the Prime Minister of Armenia for the warm reception of the Armenian side, Merab Turava noted that this is his first foreign visit after being elected President of the Georgian Constitutional Court, an evidence of how much Georgia highlights the development of multifaceted relations with Armenia. He assessed the discussions and solid cooperation with the Armenian partners as effective and stressed that the recent dynamics of the Armenian-Georgian relations is a good basis for strengthening the legal ties between the constitutional courts of the two countries.

Issues related to parliamentary governance and its importance in terms of democracy were discussed at the meeting. The sides exchanged views on the process and peculiarities of introduction of the parliamentary system of governance in Armenia and Georgia. The President of the Constitutional Court of Georgia noted that Georgia considers Nikol Pashinyan's contribution to the democratic development of Armenia to be encouraging.