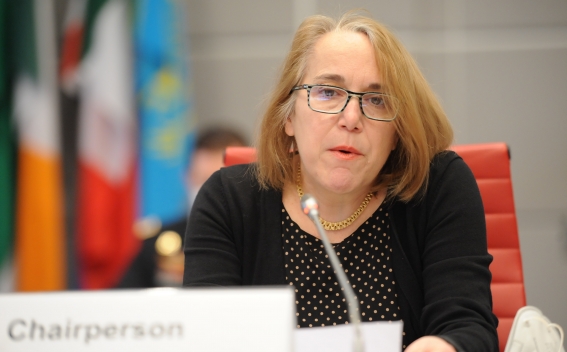 Many issues in the Nagorno Karabakh conflict context remain unresolved, but there can be no military solution, Chargé d’Affaires of the US Mission to the OSCE Courtney Austrian said at the session of the OSCE Permanent Council, Armenpress reports.

She welcomed Ambassador Andrew Schofer, Ambassador Igor Khovaev, and Ambassador Brice Roquefeuil, Co-Chairs of the Minsk Group, together with the Chairpersonship’s Personal Representative, Ambassador Kasprzyk, to the Permanent Council, stating the United States attaches great importance to their continued work. We are committed to helping the sides find comprehensive solutions to all remaining issues related to or resulting from the Nagorno Karabakh conflict.

''We thank all of you, including the head of the High-Level Planning Group, for your astute reports and updates”, Courtney Austrian said. “Since your last appearance at the Permanent Council in November 2020, the situation on the ground had stabilized but remained fragile. This week underscored that fragility. We regret that Armenian and Azerbaijani troops clashed along the Armenia-Azerbaijan border and that this violence resulted in casualties.

These recent events give fresh urgency to the need for a comprehensive settlement. We call on both Armenia and Azerbaijan to uphold their ceasefire commitments and take immediate steps to deescalate tensions, as well as to refrain from inflammatory rhetoric and provocative actions and or statements”. She encouraged the sides to build on the progress made during the joint meetings of the Foreign Ministers of Armenia and Azerbaijan held under the auspices of the Co-Chairs in New York and Paris, by continuing to engage in direct dialogue aimed at contributing to security, stability, and prosperity in the region.

“We also urge the sides to investigate all allegations of human rights abuses and violations of international humanitarian law”, she added. Courtney Austrian welcomed Ambassador Kasprzyk’s and his team’s efforts to promote transparency and confidence among the sides.

“Many issues in the conflict context remain unresolved, but there can be no military solution. The United States is committed to working with the sides to find a lasting and peaceful resolution based on the principles, recognized by all participating States, of non-use or threat of force, territorial integrity, and equal rights and self-determination of peoples, as embraced in the Helsinki Final Act”, she said.