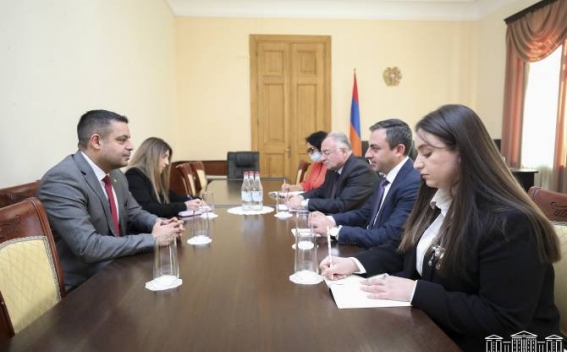 On November 22, the RA NA Vice President, the Head of the Armenia-Syria Friendship Group Ishkhan Saghatelyan met with the Ambassador Extraordinary and Plenipotentiary of the Syrian Arab Republic to the RA Mohammed Haj Ibrahim.

Ishkhan Saghatelyan referred to the destabilizing role of Turkey in the region and the inadmissibility of the encroachments of that state against the territorial integrity of the countries of the region. In this context, the Deputy Speaker of parliament highlighted the cooperation of Armenia and Syria on the international parliamentarian platforms.

The Ambassador, in his turn, has expressed an opinion that the steps of Turkey are completely against the stability of the region. He considered the involvement of mercenaries and terrorists by Turkey in the war, as it happened during the 44-day war, unacceptable.

The sides have attached importance to deepening and expanding the bilateral friendly and fraternal relations, underlining that the cooperation of two countries is historically special. In the context of the development of parliamentary diplomacy, the interlocuters stressed the active role and the significance of mutual visits. The implementation of steps aimed at deepening economic relations, in particular, increasing the volumes of export and import was touched upon. The considerable role of Syrian Armenians in the social and political life of the country was underlined.

The NA Vice President expressed readiness to support the implementation of the initiatives aimed at promoting the bilateral relations.