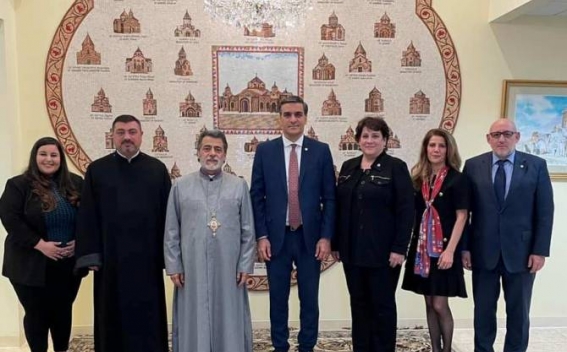 During the meetings in the United States, Human Rights Defender of Armenia Arman Tatoyan presented facts about the illegal incursions of Azerbaijani armed forces into Armenia’s territory and their violations of rights of Armenian residents, Armenpress reports.

The Ombudsman also emphasized the necessity of the creation of a security zone as a guarantee to human rights.

The facts of violations of rights of Artsakh-Armenians, which are based on the reports of the Ombudsman of Artsakh, were also presented.

Tatoyan arrived in the US at the invitation of the Armenian National Committee of America-Western Region. He already had a number of meetings with different representatives of the Diaspora, spiritual leaders and US officials.

Arman Tatoyan said that the Azerbaijani servicemen are illegally deployed on the roads between Armenia’s towns and villages, which endangers people’s life and health, distorts people’s normal life.

The Ombudsman also touched upon the issue of the Armenian prisoners of war who are still illegally held in Azerbaijan, emphasized the need for their immediate return. He also presented Azerbaijan’s sham trials of the Armenian POWs, attaching importance to the international response to those actions of Baku.