Armenia is Ready to Start the Process of Border Delimitation and Demarcation: the Speech of Prime Minister Nikol Pashinyan at Trilateral Negotiations in Sochi 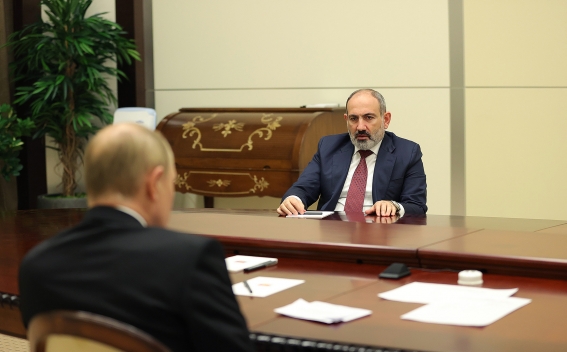 The trilateral meeting of the Prime Minister of Armenia Nikol Pashinyan, the President of Russia Vladimir Putin and the President of Azerbaijan Ilham Aliyev is taking place in Sochi, Russia.

Prime Minister Nikol Pashinyan particularly said in his speech, “Honorable Vladimir Vladimirovich, first of all let me thank you for the invitation and organization of this meeting. But before moving on to today's agenda, let me express condolences on behalf of my and the Armenian people over the explosion in Kuzbass. Many people were killed, and I want to express my solidarity with the families and relatives of the victims.

Your personal role and the role of the Russian Federation in stopping last year's war is obvious. Following November 9, Russian peacekeepers were deployed in Nagorno-Karabakh, along the Lachin corridor. It is obvious that the Russian peacekeepers, the Russian Federation, play a key role in stabilizing the situation in Nagorno Karabakh and the region, but I want to emphasize that, unfortunately, the situation is not as stable as we would like it to be.

Dozens of people have died from both sides since November 9 last year. The incidents take place both in Nagorno Karabakh and after May 12 this year, we actually have a crisis situation on the Armenian-Azerbaijani border as well. Our assessment is that the Azerbaijani troops have invaded the sovereign territory of Armenia. Of course, the border between Armenia and Azerbaijan is not delimited or demarcated, but the state border exists, it is the sovereign territory of the Republic of Armenia.

I do not agree with the statement of the President of Azerbaijan that all the points, except for the unblocking of communications, have already been implemented. You know, we have discussed this with you many times, both face to face and over the phone, that there is also the issue of prisoners of war, hostages and other detainees. This is a very important humanitarian issue, I want to say that we have gathered today not only to raise the issues, but also to talk and discuss the existing issues.

I have also stated many times that Armenia is ready to start the process of border delimitation and demarcation. The issue of unblocking all transport and economic infrastructures is also very important for us, we are sincerely interested in solving these issues. I hope that today we will discuss all these issues, and you mentioned the settlement of the Nagorno Karabakh conflict during your meeting with the President of Azerbaijan, and the President of Azerbaijan just talked about the peace talks between Armenia and Azerbaijan, of course, we are also interested in that. We believe that the settlement of the Nagorno Karabakh conflict should take place within the framework of the OSCE Minsk Group Co-chairs’ format, but I think that many issues can be discussed, resolved in a trilateral format, in a bilateral format.

I must say that direct contacts are already being loomed between the Armenian and Azerbaijani officials, and I think that this should also be emphasized against the background of not so good and positive nuances. These positive nuances should also be emphasized. And most importantly, I want to reiterate, I think that the main purpose of today's meeting is not only to speak about the presence or absence of specific issues, but the main point is that today we can come to concrete or as concrete decisions as possible for achieving stability in South Caucasus, since peace, stability and people’s safety is our responsibility”.