Silk Road: Armenia a Bridge Between East and West

During the recent years Chinese-Armenian relations have been developing more and more, but the past several months were a real success in this regard. The reason is most probably the changing geopolitical situations and the growing role of Armenia in all this. The restoration of the Great Silk Road was one of those initiatives of China that became the impetus for deepening Armenian-Chinese relations, taken into consideration the fact that for centuries Armenia has been an important transit territory for trade between East and West.

The importance of the restoration of Silk Road was also highlighted by the President of Armenia Serzh Sargsyan in his speech at the Ufa Summit. He mentioned that Silk Road can ensure a new stage for the implementation of the extensive infrastructure and transport projects in future. Earlier, during RA President’s visit to China at the end of March of this year, Armenia signed a memorandum on strengthening cooperation in the establishment of the economic zone of the Silk Road.  In this regard, during the Boao International Forum, the RA President Serzh Sargsyan said: "Armenia is also ready to become a center for interests of Asian businessmen. I would also suggest that you explore the opportunities to found regional headquarters of Chinese and other large Asian companies in Armenia. Especially attractive areas for businessmen could be the energy sector, cooperation in the North-South Road Corridor and the Armenia-Iran railway construction projects in consistence with the initiative of the Silk Road," the press service of the RA President writes.  This, of course, will open new prospects not only for Armenia, but also for the entire region.

To have a full picture what future Armenia can have joining the Silk Road and using its full potential, it is important to go back and see its role in the Silk Road centuries ago.

Silk Road itself was opened in the 2nd century BC, when the cultural and commercial exchange between the Roman and Han Chinese empires was boosting. The continuation of this road was the so-called "South Road", which passed through Bactria to Mesopotamia and Syria. Trade road from the East passed through Armenia, through the town of Artashat, from there to the ports of the Black Sea. As H. Martirosyan writes, Artashat was an international trade exchange point. In the 5th century Dvin – the new capital of Armenia, came to replace Artashat. The trade route, which connected China, Central Asia and Iran to the capital of Byzantine - Constantinople was passing through Dvin .

The main goods of exchange in Artashat and Dvin were Chinese silk and products made of it. In addition to the Byzantines and Persians, merchants from India and Iberia (Georgia) were coming to trade in Artashat and Dvin. World trade through Armenia significantly developed in the 5-6th centuries. 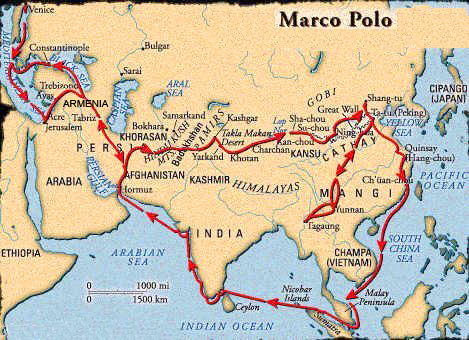 In the 9-10th centuries, Armenian cities Arttsn, Kars and Ani began to play a significant role in the world trade. During excavations, shopping arcade with special facilities, as well as silk products, Chinese porcelain, Persian pottery and dyes were found in Ani. Armenian historian of the 10-11th centuries Asoghik (Stepanos Taronetsi) informs that during the reign of the Smbat 1st (890-914gg.) "a field turned into a village, the village in a rich town with a lot of people, so as even the shepherds began to appear in silk dresses." The trade through the Silk Road particularly grew in the 13-14th centuries, when Mongols gave new impetus to the development of trade relations between East and West. It was during this time that the Armenian Kingdom of Cilicia became a transit trade area between the West and East. Many merchants, missionaries, among them the Italian merchant and traveler Marco Polo, passed to East through Cilicia.

In the mid 15th century, as the sea trade routes started developing and also in regard with political instability and economic decline of Central Asia, the Great Silk Road, having existed for 15 centuries, ceased to be.

It is even unnecessary to stress how great importance Armenia had during those times for East and West. Centuries have passed and it seems the history repeats itself, opening new opportunity for the whole world, and for Armenia as well. Of course, taking into consideration that now it is the 21st century with highly developed technologies, Armenia has all the chances to become a bridge between East and West, become even a more important player, than it had been before. There is already political will for this, which has been expressed from different levels, the only thing that remains for Armenia is to open its full potential, to be more in the role of an initiator and conduct a clear and right diplomacy with China.