"I am Armenian, but I have never been in my homeland. I hope that one day I will realize the dream of my parents and come to Armenia,'' said Anna Der-Vartanian, the first female Master Chief Petty Officer in U.S. Navy.

In 1959, while serving as assistant to the Global Strategy Officer at the Naval War College in Newport, Rhode Island, Der-Vartanian received her promotion to Master Chief Petty Officer. With that promotion, she made history as the first woman in the U.S. Armed Forces to be promoted to the rate of E-9.

After promotion, Der-Vartanian was appointed US National Military Representative to NATO (Paris). During those years she met with President John F. Kennedy.

But how the military career of a woman who changed the history of the U.S. Navy began?

Anna Der-Vartanian was born on December 6, 1920, in Detroit, Michigan, in the family of Armenian refugees. From 1941-1942 she attended Detroit Business University during which she also enlisted in the Army Women's Auxiliary Air Corps (WAAC). 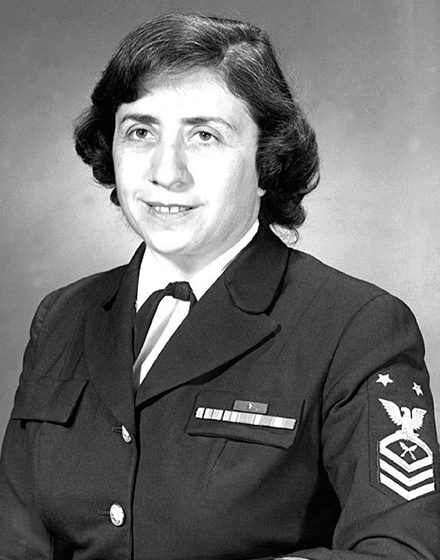 Shortly after the outbreak of World War II she elected to leave the WAAC, joining the U.S. Navy as an Apprentice Seaman in the women's unit known as Women Accepted for Volunteer Emergency Service (WAVES). By the way, Der-Vartanian's whole family was engaged in military service; her sister, Jeanne Oliver, was serving in the U.S. Navy while her brother, Andrew, served in the U.S. Army in the Pacific theater of war. Der-Vartanian's mother wanted to join the Navy, but opted to stay home and serve the American Red Cross.

After basic training, Der-Vartanian held an administrative position in Great Lakes, Illinois. After that  from 1946 - 1947 she worked at Naval Station Treasure Island in San Francisco, California. While there, she was promoted to the rate of E-7, Navy Chief Yeoman (YNC). In 1957, she was promoted to the rate of E-8, Senior Chief Yeoman (YNCS), and transferred to the Public Information Office in Boston, Massachusetts. In 1959, while serving at the Naval War College, she was promoted again, making YNCM Der-Vartanian the first woman to reach E-9 in the history of the United States Armed Forces.

After retiring from the U.S. Navy in 1963 Anna Der-Vartanian joined the Central Intelligence Agency (CIA) in 1964 as a junior analyst, later becoming a counterintelligence specialist. Details of her service are sparse. "I enjoyed it. I was an analyst in the Middle East, on the clandestine side," Der-Vartanian said, adding mysteriously, "That's all I can say, except that I traveled."

For 20 years of her military career, Der-Vartanian served in almost all U.S. states, from San Francisco and Washington to Boston and Oahu (Hawaii). Der-Vartanian was fluent in English, Armenian and French, and knew some Spanish and German. She officially traveled to Egypt, Tunis  and Algeria. Despite her great desire to visit Armenia, she never had managed to visit her homeland. She never got married, devoting her whole life to her carrier. "To her dying day, she never, ever stopped serving'',  Air Force Brigadier General (Ret.) Wilma Vaught once said.

Der-Vartanian never had children, and the last years of her life she lived with her nephews.

Anna Der-Vartanian died on August 4, 2011, at the age of 90. She was awarded the National Defense Medal, as well as many other military awards, for her service. As an exemplary female soldier, until now she is remembered for blazing a path for women in the United States military.