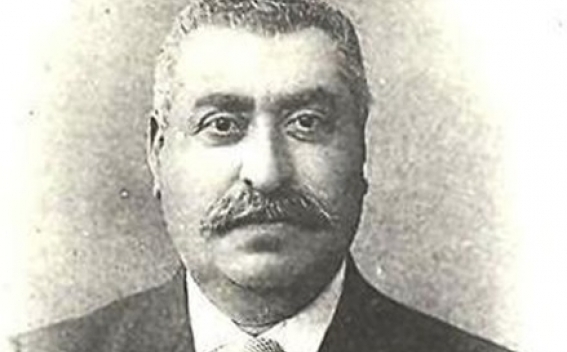 On January 2, 1910 “Sankt Petersburg” news reported, “...the New Year reception was attended by the Emperor of All Russia and His family, among the invitees were also the 20 richest people. There were only three Russian citizens (not based on nationality or religion) in the reception of Nikolas II, financier and industrialist Putilov, oil industrialist Mantashev and the Duke of Georgia, Chikovani. Among the guests were also oil industry owner Nobel, banker Rothschild and factory owner Zinger. Invited were also automobile tycoon Chandler and steam navigation company owner Schmetkhe, Noev-kovcheg.ru reports

Alexander Mantashev (Mantashiants) was born in Tiflis in 1842 to the family of merchants. Mantashev spent most of his childhood in Tabriz, in northern Iran, where his father was involved in cotton and textile trade. Being the only son, he was involved in his father's business affairs early on.  In 1869, he moved to Manchester, a major center of cotton and textile processing industries, from where he helped ship goods to his father in Tabriz. Mantashev's stay in Manchester played an important role in the development of his character. Not only did he learn the secrets and crafts of the textile industry in Manchester, but he also delved into the intricacies of European business and English culture. During this period he learned the English, French, and German languages.

In 1872 following his return to Tabriz his father closed down the businesses and sold the property to return to their native Tiflis. Shortly after in the first floor of the hotel Caucasus, located in Erivansky Square, the Mantashevs opened a cotton store, then another one, eventually becoming fully engaged in the wholesale textile trade.

In 1886 Alexander’s mother died. A year later, his father, grief-enervated went to join his wife. Having inherited over 200,000 rubles Alexander purchased most of the shares of the Tiflis Central Commercial Bank, highly valued in Sankt Petersburg stock exchange — thus becoming its principal shareholder, and then the Chairman of the Board of the Bank as a 1st guild merchant.  Upon becoming speaker of the Tiflis duma he became interested in oil, Noev-kovcheg.ru writes.

Mantashev, not being afraid of high risk investments, bought unprofitable oil wells in Baku that very soon became profitable. He built tankers for oil and fuel transportation to India, China and Japan as well the Mediterranean. In 1899 he founded the trading house "A.I. Mantashev and Co.", opening representative offices and warehouses in the major cities of Europe and Asia.

Mantashev became a shareholder in a number of oil companies, among them the “Nobel Brothers,” 51.3% of the total stock of oil and 66.8% of the oil content in the Caspian Sea was centered on the firm.

Mantashev funded the Baku-Batumi pipeline which was launched in 1907, becoming the world's longest pipeline, 835 kilometers long. He came to be called as “king of oil”.  From 1899 to 1909, his company by volume of fixed capital (22 million rubles) was the largest in Russian industry,  ourbaku.com writes.

Armenian classical Shirvanzade, a contemporary of Mantashev, describes him as follows, “It was not about the huge amounts, but the huge heart that played the most important part in Mantashev’s charity. He did not donate huge amounts of money out of vanity but upon the call of his sensitive soul.”

Mantashev hand-picked fifty talented young Armenians and sent over two hundred to study at the best universities of Russia and Europe. Later many of them developed the Armenian culture and science, among them komitas, the founder of the Armenian classical music.

The most famous donation made by Mantashev remains the Armenian Church of St. John the Baptist in Paris on Jean Goujon street. The businessman ironically explained the reason of donating such an amount for the Armenian church. “That’s the city where I sinned most.”  The church of St. John the Baptist is one of the most engaging temples of the Armenian diaspora.  During its construction in 1904 Mantashev spent 1,540,000 francs. For this act, the President of France bestowed Alexander Mantashev with the Order of the Legion of Honor.

Mantashev loved the theatre. In Tiflis he built the Pitoewski Theatre (now the Rustaveli Theatre). In the Academie National de Musique of Paris he had a personal lounge. He intended to build a similar theatre in Yerevan, but alas, there was no time left.

Despite all of his wealth Mantashev led a modest lifestyle. He did not like gold and never wore jewellery. He only attached a fresh flower to his vest. He did not have an entourage and enjoyed travelling by tram in Tiflis.

Mantashev died on 19 April 1911 in Saint Petersburg. His body was moved to Tiflis and buried next to his wife at the cemetery of Van Cathedral which was being restored at the time with his donations. After the October Revolution of 1917, his company ceased to exist along with all the other oil companies in Russia. In 1933, by the order of Lavrentiy Beria, the Van Cathedral was destroyed along with the cemetery where Mantashev was buried.

Mantashev had eight children, four sons – Hovhannes, Levon, Hovsep and Gevorg (Gigo) and four daughters – Anna, Nadezhda, Barbara and Tamara. Forty days after Mantashev’s death the family notary opened his will. His fixed capital in Tiflis was worth more than three million rubles, that passed to his sons. Hovhannes got the bulk of the property due to his frequently occurring diseases. The remaining part was equally divided among the other heirs. The same will stipulated that the property will pass on to grand-children born from women belonging to the Armenian apostolic faith.

Not a single document went into effect without Alexander's resolution, "Asttsov" ("with God" in Armenian).

People often asked Mantashev for money for their personal needs, for their businesses, for their children’s weddings or for buying homes, the reasons were many. Before giving money to anyone Mantashev would ask for the purpose, as he was flatly against wasting money. Once someone asked for 320 rubles and to the question why, he answered that his son is getting married and he wants to play a lavish wedding. Mantashev answered there was no money and there would not be in the near future. A few days after that someone else asked for 450 rubles to open a butcher’s shop. Mantashev asked about the location, and 2 days later invited the person to his home and told him that he had made wrong accounting, he needed 2200 instead of 450. He appreciated people who had life objectives and wanted to have accomplishments.

In 1898 Stepan Shahumyan, alumni of one of the schools founded by Mantashev, later became Mantashev’s youngest son’s Gigo-Gevorg’s teacher. Mantashev liked Stepan so much that offered him to marry his daughter, Nadezhda, with 200,000 dowry and manager’s job. Shahumyan refused.

Arakel Sarukhanyan, one of the allies of the oil tycoon, having fled from Bolshevik Baku in 1931, published a book, where he expressed his admiration towards Mantashev's business insight, “I am writing Mantashyants as the late would sign like that in Armenian, and Mantashev in Russian and in foreign languages Mantacheff.” Mantashev himself would say, “Such changes of letters in names do not affect his desire of being helpful to the people.”