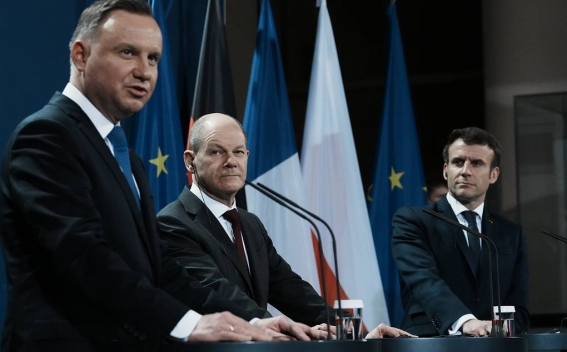 Berlin, Paris and Warsaw are calling upon Moscow to start a substantial dialogue on European security issues and to help defuse the situation in Ukraine, the leaders of Germany, France and Poland said in a joint statement on Tuesday evening after a meeting in Berlin, TASS reports.

German Chancellor Olaf Scholz, French President Emmanuel Macron and Polish President Andrzej Duda gathered in Berlin on Tuesday for the summit of the Weimar Triangle, a tripartite group formed on August 28-29, 1991, and initially designed as an instrument for bringing Poland closer to the European Union and NATO.

"The heads of states and governments of the Weimar Triangle (Germany, France and Poland) underlined their commitment to joint efforts for the cause of strengthening European and Trans-Atlantic security architecture," the document says.

It reaffirms that Berlin, Paris and Warsaw remain committed to principles sealed by "various OSCE documents." "The three countries will continue to closely coordinate their actions with EU partners and NATO allies with the goal of ensuring peace and stability in Euro-Atlantic," it says.

The three leaders "call upon Russia to contribute to de-escalation on the Ukrainian border and start a substantial dialogue about security on the European continent." They also declared their "readiness to constructively participate in detailed and result-oriented negotiations on security issues of mutual concern." The leaders stressed that "any new Russian military aggression against Ukraine would have serious consequences and a high price."

They were united in the opinion that NATO should "constantly review its defense and deterrence strategy" and to be ready to bring about necessary adjustments if the security situation deteriorates, including under the Enhanced Forward Presence initiative.

Scholz, Macron and Duda also spoke in support of the Normandy format of Ukrainian reconciliation.

Concerns over Moscow’s alleged preparations for an invasion into Ukraine have been increasingly announced in the West and in Kiev recently. Kremlin Spokesman Dmitry Peskov castigated these statements as an empty and groundless escalation of tension, emphasizing that Russia posed no threat to anyone. At the same time, the Kremlin press secretary did not exclude some possible provocations to justify such claims and warned that the attempts to resolve the Ukrainian conflict by force would carry extremely serious consequences.