Lazar Serebryakov, Russian Admiral of Armenian Descent, One of the Founders of Novorossiysk 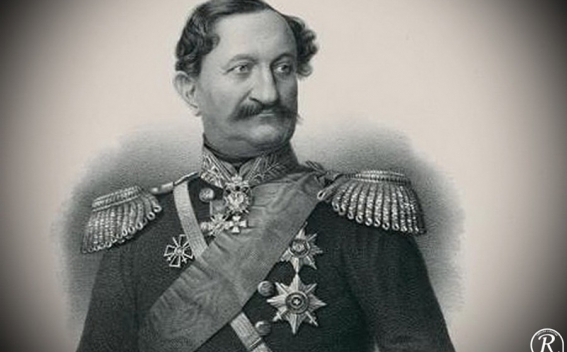 Lazar Serebryakov, or by his birth name Ghazar Artsatagortsian, was  a Russian admiral, who participated in the Russo-Turkish War and also held top command positions during the Crimean war. He was a member of Admirals’ Council, and laid the foundation of the city of Novorossiysk. Admiral Serebryakov stood out for his courage and valour. Being a highly educated naval officer and mastering several western languages, he not only was an outstanding military but also a gifted scientist.

Ghazar Artsatagortsian was born in Belogorsk (Crimea) to a noble Armenian family. Ghazar took the surname Serebryakov which is the literal translation of the Armenian word artsatagorts. Ghazar was brought up in the midst of Armenian traditions and studied at an Armenian school, Lratvakan.com reports.

Serebryakov took up military service in 1810 as a volunteer in the Black Sea Fleet. In 1814 he became midshipman, in 1820 lieutenant and in 1828 captain lieutenant and was appointed to lead the General Marine headquarters.

In 1828-1829 Serebryakov participated in the expedition against the Turks. In the 1828 expedition he stood out in Anapa invasion, later in Varna blockade. In the 1829 campaign Serebryakov took part in the capture of Nessebar and  Media. For his valour against the Turks he was enrolled in the Guardian equipage. In 1832 he received the rank of captain 2 and was in the expedition detachment till the next year under General Muraviev around Constantinople and in Egypt.

In 1834 Serebryakov took captainship of “Poltava” vessel and was constantly sailing in the Black sea at the Caucasian shore. In 1837 he received the rank of captain 1 and was appointed as head officer for maritime affairs at the headquarters of the commander of the Caucasian line.

On September 12, 1838 by the order of Nicholas I, the ships of the Russian squadron under the command of Admiral Lazarev and General Nikolas Raevskiy  entered the Tsemessky bay. Breaking through the resistance of the Turks and the highlanders, a Russian descent of 5,816 military under the command of Lazar Serebryakov landed on the ruins of a Turkish fortress in the mouth of Tsemess. That remarkable day marked the birth of Novorossiysk.  In the Sujuk Bay, renamed Tsemessky Bay, the Russian fortification Tsemesskoe first appeared. And soon the construction of a powerful fort and city began, which in 1839 was given the name of Novorossiysk. It was Serebryakov who was commissioned to become the first builder of the city of Novorossiysk and the head of the port of Novorossiysk, Kavkazoved.info writes. For the successful landing operation on October 8, 1838, Serebryakov was made to rear admiral with the appointment of His Imperial Majesty retinue. In 1838 Serebryakov was appointed commander of the 1st division of the Black Sea coastline and head of the port of Novorossiysk.

Under the hardest circumstances he managed to mobilize troops, population and immigrants to build the entire economic and administrative structure of a large naval base. Due to his efforts the tiny village turned to a beautiful city with modern forts and comfortable jetties, sturdy residential buildings and cobbled streets, hospitals and churches, post offices and free schools for children. Serebryakov initiated the setting up of the public library of the city. Due to his efforts the Armenia spiritual center was founded there. With his efforts the Novorossiysk trade port was opened and temporary customs orders set up. In 1848 the largest building in the city built under his leadership appeared on the Market Square, the Admiralty. For great services in urban planning and the development of the region in 1848 Serebryakov received the rank of vice admiral. In 1851 he was appointed head of the Black Sea coastline.

In the Crimean War Serebryakov led the coastal defense in the ports on the Black Sea coast of the Caucasus and the evacuation of reduced fortresses. As hostilities extended to Kars, Serebryakov led the repulse of coastal fortifications occupied by the Turks in Georgia. In 1856, Serebryakov was dismissed, promoted to admiral and appointed a member of the Admiralty Council.

For outstanding services to the Fatherland the naval commander was awarded with many Russian accolades.

An accident came to disrupt the admiral’s life, Armmuseum.ru writes. In  1861 during a trip to his Crimean estate, as a result of an unsuccessful descent of the crew from the mountain, Ghazar Markovich seriously injured his leg, after which he was unable to walk. And upon arrival in St. Petersburg, he caught a bad cold and after a short illness on February 28 (according to other data on February 18), he died. He was interred with the highest military honors at the Armenian cemetery in Karasubazar beside his parents.

Time passed, and in 1955, by the decision of the Black Sea Fleet Command and at the request of the Chief of the General Staff of the USSR Navy, Admiral Ivan Isakov (Hovhannes Ter-Isaakyants), Admiral Artsatagortsyan-Serebryakov, with all military honors, was reburied in the Pantheon of Glory in the city of heros, Sebastopol beside his son, Marcos Artsatsagortsyan.

The Naberezhnaya street in Novorossiysk was called after Serebryakov. On the bank a monument to the founding fathers of Novorossiysk, Nikolai Nikolaevich Raevsky, Mikhail Petrovich Lazarev and Ghazarazar Markovich Serebryakov, was erected.