The President in Azerbaijan: I Expect Lithuania-Azerbaijan Economic Relations to Intensify 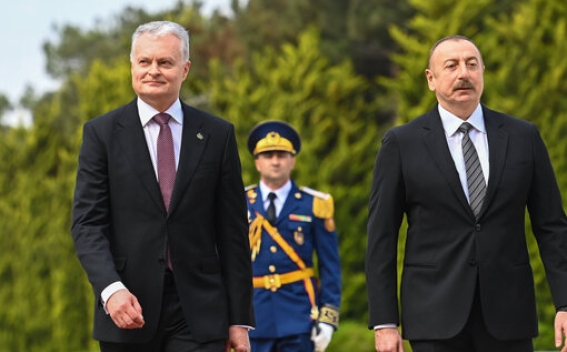 Lithuanian president Gitanas Nausėda has started his official visit to Azerbaijan. On Wednesday morning, he met with President Ilham Aliyev of Azerbaijan. The two leaders discussed bilateral cooperation in the economic, energy and transport sectors, the security situation in the Caucasus region, and cooperation between the European Union and Azerbaijan, the President‘s Communication Group reported.

During his meeting with the Azerbaijani leader, the President underlined that Azerbaijan is an important partner of Lithuania in this region. According to the President, peace, stability, and economic growth in the Caucasus are of common interest to the countries of this region, to Lithuania and the entire EU. The President stated that Lithuania supports greater cooperation between the EU and Azerbaijan, making use of all existing opportunities. Gitanas Nausėda maintained that the EU-Azerbaijan strategic partnership is of particular importance in the face of the Russian war in Ukraine. The President stressed the need to support Ukraine by all means.

The Lithuanian and the Azerbaijani leaders discussed prospects for expanding bilateral cooperation between the two countries, particularly in the field of energy, which can be mutually beneficial.

“The war in Ukraine has spurred the European countries on to look for ways to diversify their energy sources. We see Azerbaijan as a reliable partner in the energy sector and are therefore interested in intensifying our cooperation. Lithuania could offer Azerbaijan solutions in the field of renewable energy, especially solar energy,” the President said.

Gitanas Nausėda also underlined the potential for cooperation in the field of transport. According to the President, Lithuania is an EU country with a well-developed infrastructure and can be viewed as a gateway to the EU. The President also pointed out that Lithuania was interested in the railway project Transport Corridor Europe-Caucasus-Asia, which could be an alternative to the existing routes from Asia to Europe.

President Gitanas Nausėda added that the two countries could also promote their cooperation in the fields of IT, innovation, and education. The President was accompanied by a large delegation of entrepreneurs seeking to expand their business operations in Azerbaijan, as well as representatives of the Ministries of Education and Science, Economy and Innovation, Transport and Communications, and Agriculture.