Journalists Not Allowed Into Marriott Armenia Hotel building in Yerevan 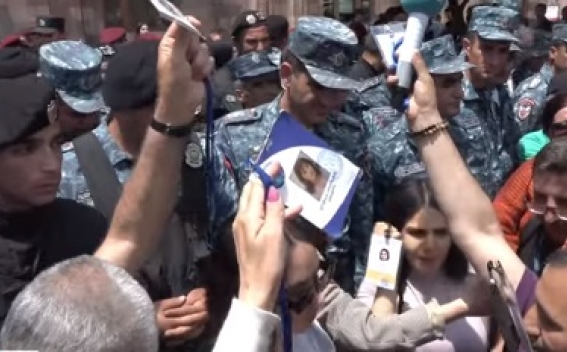 Journalists were not allowed to enter Marriott Armenia Hotel in Yerevan, where a Freedom House forum on "Armenian Democracy" is taking place in one of the halls, NEWS.am reports.

The journalists demanded from the policemen surrounding the hotel to tell the organizers of the event that they wanted to enter the room and take part in the international forum. They said that freedom of speech issues were also discussed during the forum, the beneficiaries of which were the media. However, the journalists were never allowed inside.

"We asked the deputy head of the police to pass on our request, but the journalists were not allowed to take part in the event. This is an important forum for journalists, as they discuss issues related to freedom of speech and police," said journalist Ani Gevorgyan.

A Freedom House forum on "Armenian Democracy" is held at Marriott Armenia Hotel and Armenian Prime Minister Nikol Pashinyan is scheduled to speak. The event is also attended by EU and US ambassadors and representatives of a number of Western-funded NGOs.

Citizens concerned about the security of Armenia and Karabakh gathered outside the Marriott Armenia Hotel to demand Pashinyan's resignation.