A Large Aluminum Extrusion Plant to Be Established in Armenia 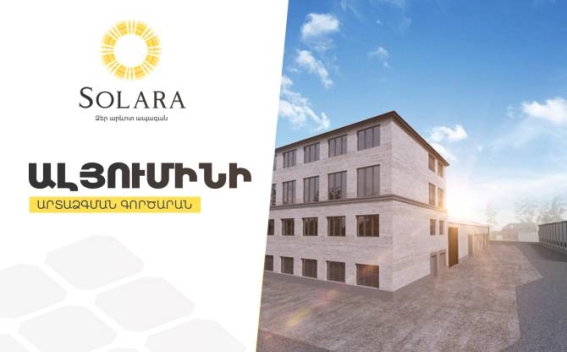 The Government of the Republic of Armenia has approved the application submitted by Solara Company, taking into account that the company is going to import technological equipment and components for them within the framework of the investment program implemented in the priority sphere. The Government has granted a tax incentive to the company for the purchase of equipment and raw materials.

As ARMENPRESS was informed from the company, Solara is one of the leading companies in the field of solar energy in Armenia, specializing in the installation of private, business or industrial scale solar photovoltaic stations.

The company established the "Konstal" aluminum extrusion plant in Abovyan community, for which it acquired 23 thousand square meters of land for carrying out production activities.

According to the CEO of the company Hayk Petrosyan, this decision of the Government is a strong impetus to increase the attractiveness of organizing production in Armenia and making investments.

“The Government of Armenia has always supported the development of renewable energy and the works done in the field. We have repeatedly stated that in order to further stabilize Armenia's economic growth and make further progress, it is necessary to direct the vectors of economic development to the producers. We, for our part, have adopted this important direction and will continue to work in that direction. The investment budget for the construction of the aluminum extrusion plant is $ 15 million, as a result of which we will not only have sustainable production, but also create about 200 jobs," said the CEO of Solara.

Most of the products will be exported to the USA, Europe and EEU member states.

The opening of the aluminum extrusion plant is scheduled for November 2022, and will operate with a monthly production capacity of 600-800 tons.