We Were Waiting For the CSTO Mechanisms to Work, But Unfortunately They Didn’t Work: Alen Simonyan at CSTO PA Council Meeting 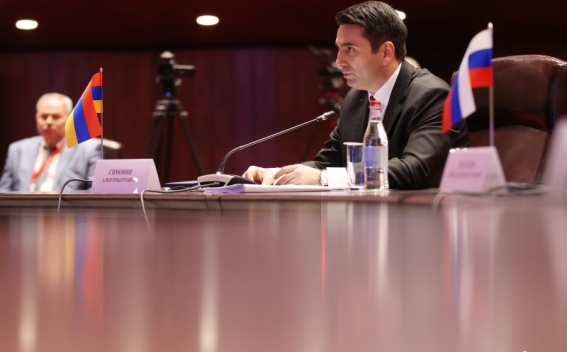 Dear colleagues, I am glad to welcome you.

Assuming the chairmanship of the Organization as a priority a problem was laid down to modernize the crisis response, monitoring, the forecast of crisis situations and the prevention mechanisms. I would like to mention with satisfaction that appropriate steps have been undertaken in these priority directions. I mean the crisis response mechanisms.

As you know, at the beginning of this year, taking into consideration the bid by the President of Kazakhstan Mr Tokayev, Armenia as chairing country to the CSTO, urgently initiated consultations with the heads of the countries of the organization, as a result of which Prime Minister Pashinyan announced about his decision of sending the CSTO peacekeeping corps. The results of the peacekeeping action assured the readiness of the Organization on taking measures on time in counteracting the security challenges and threats of the member states and showed the role of the CSTO in preserving the regional stability. We always considered that the CSTO crisis response mechanisms should work in a right way. Meanwhile, Armenia was in a situation, when we were waiting for the mechanisms to work, but unfortunately they didn’t work.

Armenia pays special attention to the deepening of the external political coordination and the mutual support for the elaboration of the agreed approaches over the international and regional issues, which touch upon the interests of the CSTO member states. I am fully convinced that such unity should be displayed towards any ally state of the organization.

This year considerable efforts are made to the improvement of the response system to the crisis situations in the regions of the Collective Security Treaty Organization, the modernization of the mechanism of the adoption of the appropriate decisions, first of all, the normative-legal base development, as well as the establishment of cooperation within the framework of the crisis response centre.

The nest priority of the Republic of Armenia is the further development of the CSTO troops (collective forces), the preservation of their readiness for the fulfillment of the targeted tasks, taking into consideration the forecast of the dynamics and change of the military-political situations in the regions being in the immediate vicinity of the CSTO responsibility zone.

I would like to separately emphasize the role of the parliamentary measurement of the Organization on which our priorities are the rapprochement and harmonization of the national legislation of the CSTO member states in ensuring the security, taking into account the challenges and threats, including the digital, economic, financial and environmental spheres.

I shall note that the chairmanship of the Republic of Armenia passes in the hard transformation period of the security architecture of the world.

We witness that in the CSTO responsibility zone the situation is tense, and the member states of the Organization continue clashing with the new challenges and threats. The conflict potential continues growing along the perimeter of the allied states’ borders. The situation is hard and grave on the border of Tajikistan and Afghanistan. We hope that the problems existing between the conflicting countries will be resolved through diplomatic means. The situation also remains tense in Nagorno Karabakh. Unfortunately, Azerbaijan continues pursuing rather aggressive policy against Armenia and Nagorno Karabakh. The invasion of the Azerbaijani sub-divisions into the Russian peacekeepers’ responsibility zone in Nagorno Karabakh causes concern. We hope that the representatives of the Russian peacekeeping contingent, which have a key role in ensuring security of the Armenian population of the Nagorno Karabakh, will restore the status-quo of November 9, 2020 trilateral statement.

The Republic of Armenia is faithful to the implementation of all agreements and the next trilateral statements of the heads of the states. In the context of the created humanitarian problems because of 44-day war, the priority is the unreservedly and urgent return of Armenian prisoners of war and other civilians held in Azerbaijan, as well as the preservation of the Armenian religious and cultural heritage in the territories passed under the Azerbaijani control.

Dear colleagues, I would like to once again underscore that the Nagorno Karabakh conflict is not a territorial dispute, but the issue of the right of the Armenians of Nagorno Karabakh to live safe in their homeland. We believe that the OSCE Minsk group Chairmanship should play a key role in the advancement of the peaceful process of Nagorno Karabakh conflict. At the same time, we call on the leadership of Azerbaijan not to violate the steps aimed at ensuring the stability and peace in the South Caucasus with their bellicose and minimalistic rhetoric.

Armenia is committed to the establishment of peace and welfare in the region and repeatedly recorded the willingness of beginning negotiations on the settlement of the relations with Azerbaijan. We filled in the agenda for reaching the comprehensive peace with our proposals and handed them over to the OSCE Minsk Group Co-Chairs.

Concluding my speech, I would like to mention that no matter how up-to-date the priorities of the development of the Organization sounded by Armenia, we can reach results only due to the joint efforts directed to the further strengthening of the security system, constructive and effective cooperation and the dynamic development of the allied relations between the member states of the Organization.

Thank you for your attention.