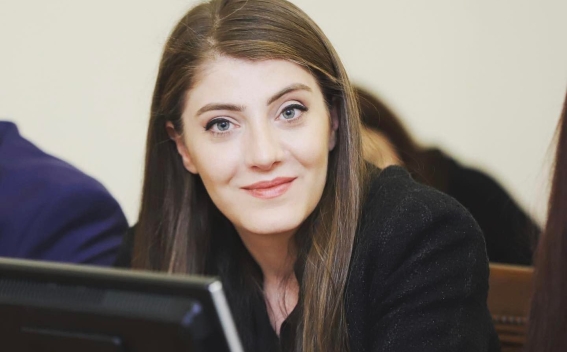 During the Youth Inter-Parliamentary Forum of the CIS Member States held in Saint Petresburg the member of the RA delegation, the rapporteur of the Forum, the deputy Lilit Minasyan voiced the fact of the double bombing of the Saint Ghazanchetsots Church by Azerbaijan on October 8, 2020, as a consequence of which the destruction of the church icons, as well as the statues and cross stones being on the territory of the church, drawing attention of the CIS colleagues to this circumstance.

The deputy has stressed that the change of the architectural form of the church by Azerbaijan, and its only purpose is the concealment of the fact of the monument being Armenian is concerning.

Lilit Minasyan touched upon the blowing up of the bell tower and the dome of Saint Hovhannes Mkrtich/John the Baptist Church (Green Church) of the Shushi City by the Azerbaijanis with criminal intent, as well as destroying the monuments erected in honour of the Armenians fallen during the Great Patriotic War.

She stressed that the exclusion of the atmosphere of mutual hatred, aggression, intolerance through dialogue shall become the main mission of today’s youth and future generations.

Let us note that on June 9-10, the Youth Inter-Parliamentary Forum was held in Saint Petersburg. The event was titled “Young Parliamentarians - Looking into the Future of the Commonwealth.”

The deputies Lilit Minasyan, Aren Mkrtchyan, Emma Palyan and the young representatives of the National Assembly Staff took part in the Armenian delegation in the Forum, which was dedicated to the 30th anniversary of the Commonwealth Independent States and the Youth Inter-Parliamentary Forum of the CIS Member States.

The delegation participated in the round-table discussion with the following themes: The actual directions of the legislative activities and ensuring the young people’s rights and interests, Public youth diplomacy: Inter-regional cooperation and common interests of the CIS countries, the youth and the Russian language: methods of preserving and developing the interethnic communication among Commonwealth youth.

At the Tavricheskiy Palace, the parliamentarians took part in the regular meeting of the Youth Inter-Parliamentary Forum of the CIS Member States.

The main theme on the agenda of the meeting was the role of the youth in the CIS countries in the preservation of the cultural heritage and the development of the popular art.