Armenia is Not Only Russia’s Partner, it is a Strategic Ally, Putin Tells Khachaturyan 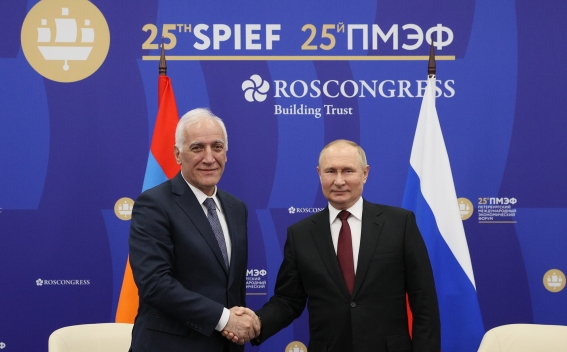 "Armenia is not only our partner, it is our strategic ally, we appreciate that," President Putin said.

"We understand everything that is happening in and around Armenia. We are determined to develop our partnership. We are interested in the establishment of a stable situation in the region that guarantees development," he continued.

"I hope that our meeting today will also contribute to that," he said.

President Khachaturyan noted, in turn: "I was in St. Petersburg a long time ago. I visited a lot during the years of the Soviet Union, it was from the 1980s to 1992. This is an opportunity to see how the city has changed, and as a former mayor, I can assess that the city really looks very nice. Even then, I remember those times: there was no such purity, beauty."

"As for the St. Petersburg conference, I am attending it for the first time, but as an economist I have always followed and highly appreciated it, because there are very interesting discussions in terms of economics. Thank you for the invitation," President Khachaturyan said.

"The Armenian people appreciate your efforts aimed at the settlement of the Nagorno Karabakh conflict. I can say that your efforts to end the war are appreciated not only by me personally, but also by the people of Armenia. It was very important that the war was stopped. It is very important for us that the agreements reached are observed," he continued.

The Armenian president emphasized the historical friendship, and voiced hope that the fraternal relations will continue in the future.

A wide range of issues on the Armenian-Russian agenda was touched upon during the meeting.