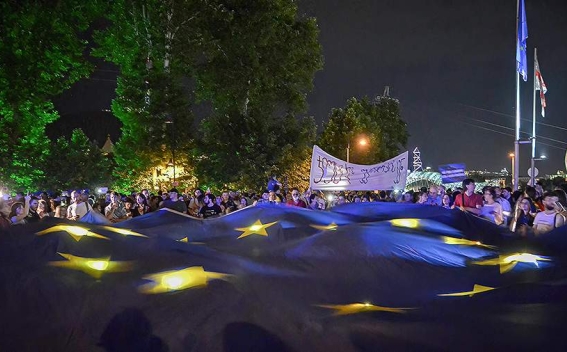 ''One of the main initiators, who urged Europe and the United States that Georgia should not receive the status of a candidate, was the representative of the Ukrainian authorities, Mr. Arakhamia. <...> He practically issued an ultimatum to Europe that if Georgia received the status of a candidate, they would be very upset,'' Garibashvili said in parliament, BB-CNTV reports.
He also accused the Georgian opposition that their representatives also went abroad with a request not to give Tbilisi the status of an EU candidate. In particular, it was about Salome Samadashvili, who during the years of her presidency Mikhail Saakashvili was an ambassador to the European Union.
According to the Georgian prime minister, out of the ''Associated Trio'' (Georgia, Moldova and Ukraine), it was his country that most of all deserved the status of an EU candidate.''Unfortunately, we did not receive it. This is a shame for us and our people,'' he summed up.
June 17 chapter European Commission Ursula von der Leyen said that the body does not recommend granting EU candidate status to Georgia, unlike Ukraine and Moldova.
Earlier, Secretary of State at the French Ministry of Foreign Affairs Clément Bon said that the EU states had reached a political consensus on granting Ukraine at the EU summit the status of a candidate for joining the union.