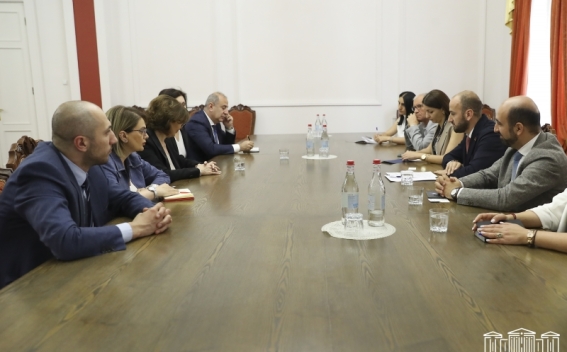 On June 27, the Chair of the NA Standing Committee on Science, Education, Culture, Diaspora, Youth and Sport Sisak Gabrielyan met with Eliso Bolkvadze, the Chairperson of the Culture Committee of the Parliament of Georgia. She is in our country on an official visit.

From the Armenian side, the deputies of the Civil Contract Faction Hasmik Hakobyan, Hakob Aslanyan and Narek Babayan participated in the meeting.

According to the Chair of the Standing Committee, the establishment and development of stable and permanent neighborly relations with Georgia is documented in the 2021-2026 program of the Armenian Government.

Sisak Gabrielyan highlighted the high-level visit of the Chairman of the Parliament of Georgia to our country in April and the meeting with the President of the National Assembly of Armenia Alen Simonyan. He also emphasized the return of 19 Armenian prisoners of war to the homeland as a result of Georgian mediation.

It was noted that the Armenian-Georgian cultural ties are especially developing. The fact that one of the streets in Tbilisi was named after the talented Armenian film director Sergei Parajanov was highlighted.

Informing that about 2000 historical and cultural values, 187 churches appeared in the territory of Azerbaijan after the 44-day war, Sisak Gabrielyan proposed his Georgian counterpart to support the relevant UNESCO Commission in organizing a visit to the region.

Expressing her readiness, Eliso Bolkvadze stated that everything should be done to preserve the historical and cultural values.

The guest underlined that the Georgian-Armenian cultural ties are developing steadily. The need for cooperation between the two standing committees was stressed. According to Eliso Bolkvadze, it will contribute to the development of diplomatic relations and the expansion of ties between the Parliaments of Armenia and Georgia.

Many other issues related to culture were discussed at the meeting. An agreement was reached to organize cultural days in the two countries. Sisak Gabrielyan proposed to draft working memoranda, which will promote joint cooperation of the two committees.