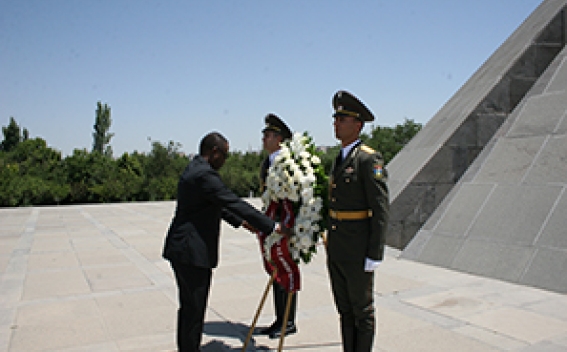 Minister of Foreign Affairs and International Cooperation of Rwanda Vincent Biruta and his delegation visited today the Armenian Genocide Memorial in Yerevan on the sidelines of the two-day visit in Armenia, Armenpress reports.

Vincent Biruta laid a wreath at the Memorial and the guests laid flowers at the Eternal Flame by paying a tribute to the memory of the Armenian Genocide victims with a moment of silence.

The Rwandan guests also toured the Armenian Genocide Museum, got acquainted with the temporary and permanent exhibits, and then the Foreign Minister left a note in the Honorary Guest Book.

The guests also visited the seminar hall of the Museum-Institute where a training for American teachers was being held.

Addressing the training participants, the Rwandan FM, as a representative of a country that faced genocide, highlighted such programs, expressing hope that it would be possible to prevent the repetition of genocide through education.

At the end of the visit the guests toured the Memory park where Vincent Biruta watered the silver fir tree planted by former Minister of Foreign Affairs and Cooperation of Rwanda Louise Mushikiwabo.